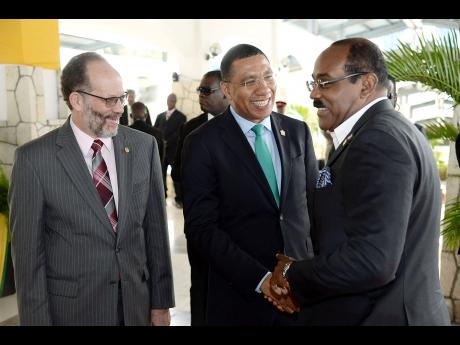 Prime Minister Gaston Browne has told the ongoing CARICOM meeting in Jamaica that by welcoming its citizens, Antigua has contributed to the development of Jamaica.

He said it is not only Antigua and Barbuda which has played this role but other Eastern Caribbean countries too.

“The members of the Organisation of Eastern Caribbean States – have absorbed a great number of unskilled labour from Jamaica and Guyana particularly over the last three decades,” the Antigua leader said.

He added that “By absorbing those numbers of people, we have eased the strain on the economies of Jamaica and Guyana at a time of need.”

He said the same is true in the wider context of CARIFORUM, where Antigua has also absorbed a significant number of nationals of the Dominican Republic which now also enjoys a trade surplus with Antigua and Barbuda.

The prime minister told colleagues that this policy is heightened by the remittances that these migrants send to their home countries.

In trade, he said the Eastern Caribbean countries suffer trade deficits with Barbados, Guyana, Jamaica and Trinidad and Tobago.

Browne said he made those points not in complaint,” but in illumination, and to guide our decisions for the future.”

“I am fully aware that in any economic integration process, especially one that includes a single market, there must be gains and losses. The realisation of the CSME can be good for us all, as long as we make provision within it for balance in the interest of all.

These are difficult but not intractable problems. If we approach them with the resolve to make the CSME work in all our interests collectively, I believe we can solve them,” he said.