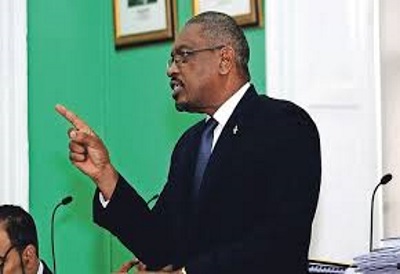 The Bahamas government says the country was not able to receive any pay out from the Caribbean Catastrophe Risk Insurance Facility (CCRIF) following the passage of Hurricane Matthew last year because the last administration did not make the annual payment of US$900,000.

Prime Minister Dr. Hubert Minnis told Parliament that Bahamas lost an estimated US$32 million in potential insurance pay-outs as a result of the “gross and stunning incompetence,” of the last administration.

He told legislators during his contribution to the budget debate on Tuesday that not only did the former government appear to use Hurricane Matthew for other activities, but by not making the annual payment of US$900,000 to the CCRIF, the country failed to qualify for the pay-outs which could have been used in so many other areas.

“Thirty two million is an extraordinary amount of money that could have been used for so many good purposes,” Prime Minister Minnis said.

“Instead, these millions were wasted by a dysfunctional government. It is shameful. It’s disgraceful. I remember when the former Minister of State claimed in the House that The Bahamas would never be able to take advantage of this facility. This was an irresponsible and untrue statement.”

Prime Minister Minnis said the other four CCRIF member countries – Haiti, Barbados, St. Lucia and St. Vincent and the Grenadines, all received combined pay-outs on their Tropical Cyclone and/or Excess Rainfall insurance policies in excess of US$29 million within 14 days of Hurricane Matthew’s passage.

Reading the contents of a May 31 letter he said he received from the CCRIF chief executive officer, Prime Minister Minnis said the facility, which limits the financial impact of catastrophic hurricanes, earthquakes and excess rainfall events to Caribbean and Central American governments, was pleased that the Bahamas had been a member since its inception in 2007.

“We are pleased that the Government purchased tropical cyclone (hurricane) policies every year between 2007 and 2014 and also purchased policies for both tropical cyclones and excess rainfall for the 2015/2016 policy year. However, we deeply regret that the Government decided not to renew its CCRIF policies for the 2016/2017 year, resulting in The Bahamas missing out on two CCRIF pay-outs from Tropical Cyclone Matthew,” Prime Minister Minnis quoted from the letter.

He told legislators “I note that the annual policy for this insurance facility was approximately $900,000. I was shocked by what the CEO of the Caribbean Catastrophe Risk Insurance Facility went on to say in his letter,” Prime Minister Minnis said.

He said the letter went on to indicate that “based on the registered losses, it means that had the Government of The Bahamas renewed its tropical cyclone policy for 2016/2017, using the previous year’s policy conditions (attachment point, exhaustion point and premium), the policy would have triggered, resulting in a pay out of approximately US $31.8 million – equal to the coverage point.”

Prime Minister Minnis said the Bahamas’ Excess Rainfall policy would also have been triggered resulting in a pay-out of US$855,874.

“Of course, those pay-outs would have been larger depending on the coverage purchased,” he said, adding, the CCRIF made pay-outs totalling US$29,204,248 to the other four CCRIF member countries affected by Hurricane Matthew.

“Needless to say, I have directed the Deputy Prime Minister and the Minister of Finance to renew the country’s policy with CCRIF so that this type of gross and stunning incompetence does not happen during our watch,” Prime Minister Minnis added.