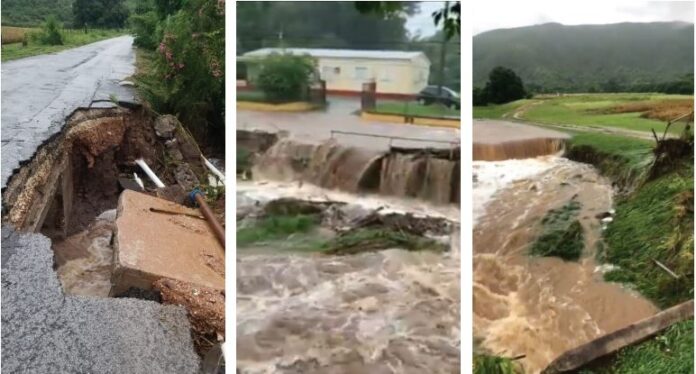 Prime Minister Gaston Browne is putting residents on notice that roads, which were damaged during this week’s torrential rains, won’t be fixed right now.

The Prime Minister Minister said the disaster could not have come at a worse time, as the economy was already in a downturn because of COVID.

Public Works has estimated the public infrastructure damage at about $168 million, which the Prime Minister described as “a daunting sum.”

“Insofar as the infrastructure recovery is concerned, we’re seeking to raise probably about 10 per cent of the value of the damage, so between $17 and $20 million so that we can commence some remedial work,” he said.

“However, we don’t have the type of money to fix those roads at this time so our people will have to endure with those bad roads for the time being.

“This is just part of the pain that one has to endure after a crisis or disaster, but I’m sure it will help us to develop character and building resilience,” he added.

Notwithstanding the damages, the Prime Minister said he remains grateful because there were no fatalities or any significant property damage.

“Truth be told, the damages could have been far worse,” he said, noting that there was up to 17 inches of rain in some areas.

“Those who suffered loss, including persons with disabilities … we’ll be providing them with some financial relief.

“The government is making between $1.6 million to $2 million available for relief purposes,” the Prime Minister added.