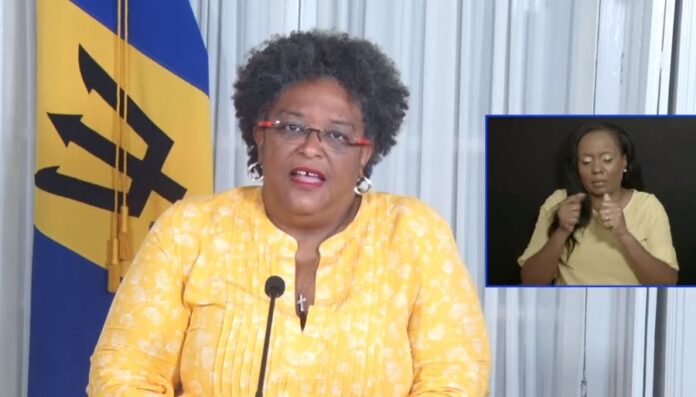 Prime Minister Mia Mottley has announced that Barbadians will go to the polls to elect a new government on January 19.

In an address to the nation Monday evening, Mottley said she has advised President Sandra Mason to dissolve parliament with immediate effect.

She has also asked Dame Sandra to issue writs for the holding of elections in Barbados.

Prime Minister Mottley said Nomination Day will be on January 3.

Mottley said she intends to have meetings convened at the Electoral and Boundaries Commision and the COVID Cabinet Sub Committee so that they may advise how best to structure the actual voting process to reflect an appreciation of the realities of COVID-19 in the country.

She said she would also ensure that the Leader of the Opposition, Bishop Joseph Atherley, and herself are fully briefed after these meetings and will update the country “in a matter of days on any agreed-upon changes with respect to simplifying the conduct of elections in this environment.”

Mottley said she’s thinking, for instance, that the number of rooms could be increased to accommodate polling in a facility.

“So, for example, at the St Leonard’s Secondary School we could shorten the alphabetical size of a station so that there’s shorter times because there is more rooms within which people can vote,” Mottley explained.

The Prime Minister said she is aware that “we are still in the midst of COVID” but she noted that “we’ve all agreed, COVID will be with us for a while.”

Pointing out that “Omicron is coming and it is going to impact us”, Mottley said, “I want us to unite as a people and to work as one.”

“It is coming, and I need Barbadians to approach and fight Omicron as one country, as one nation, as one people,” she said.

The Prime Minister said she wants Brbadians to “recalibrate as a people behind one Government and one leader.”

“And let me say, whoever emerges as that leader, I will support …Let us unite to fight the threats to our safety, our development and our prosperity,” Mottley added.