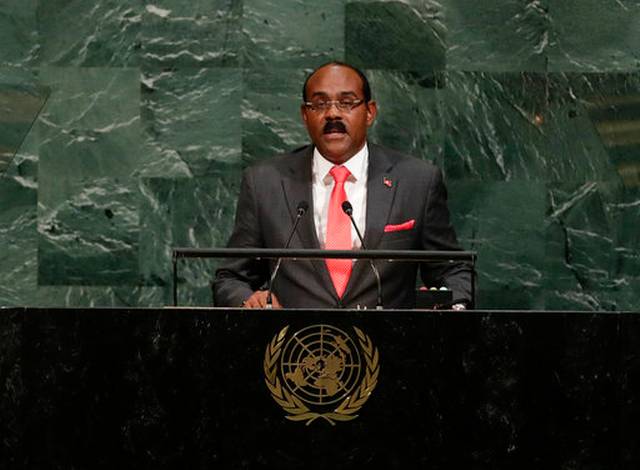 Prime Minister Gaston Browne has made an appeal to the United States to settle payment in the 13-year long World Trade Organisation (WTO) online gaming dispute.

There has been a standoff between Antigua and Barbuda and the U.S. over its (the US’s) refusal to grant the country licensed online gambling operators access to the U.S. market.

“My small country won a trade dispute with the United States in 2004 at the World Trade Organisation. The US trade violation led to significant loss of revenues to my country and unemployment of my people. It has been 13 long years since that judgment and seven years since the final appeal by the US resulted in a final ruling in my country’s favour,” Prime Minister Browne told the assembly.

He continued, “Yet the United States government has failed to settle. The loss of trade revenues to my country has risen to in excess of US$200 million dollars. Our government has laboured unsuccessfully for over 13 years to reach an amicable and reasonable settlement with the US. This is a classic case where might is right, and where the rights of a small powerless state have been trampled upon.”

Browne said the U.S. has benefited from a trade surplus with Antigua and Barbuda in the region of over two billion United States dollars over the past 13 years.

While acknowledging that the outstanding matter was no fault of the present Donald Trump administration, prime minister Browne said, “in this time of great need when our sister island of Barbuda was devastated by a hurricane, the U.S. government should, in the interest of fairness, justice and of good conscience, settle the debt”.

He quoted a speech given by President Trump two days ago before the assembly in which he (Trump) said the United States can no longer be taken advantage of or enter into a one-sided deal where that country gets nothing in return.

Browne said he welcomed the president’s stance, but added that the U.S. honouring its debt to Antigua is not a one-sided deal since 90 percent of the settlement proceeds will be spent in the U.S. economy as Antigua and Barbuda’s primary source market.

“The U.S. is the greater beneficiary of trade with my country and has been so for year after year for many decades,” Browne noted.

International Trade and foreign Affairs Minister Charles “Max” Fernandez met with U.S. trade representatives in 2015 in Washington in an attempt to reach a deal on the longstanding dispute.

That meeting was touted “as productive and useful for the exploration of various elements that could ultimately bring closure to the matter”.

It was agreed that further talks would be held to bring an expeditious settlement to the matter.

In 2003, Antigua and Barbuda took the U.S. to court and a ruling was made supporting the claim that the U.S. online gambling stance was an improper trade barrier.

The amount now owed has swelled to over $200 million and the country was given permission to get the sum by any means necessary, including offering royalty-free downloads of U.S. intellectual property.

The government also made proposals of a one-time offer payment of $100 million to resolve the dispute.