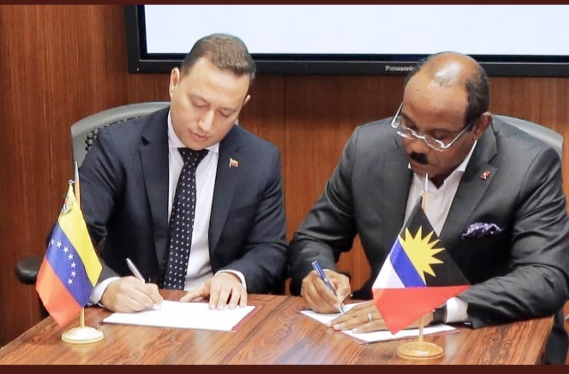 PM Browne left Antigua and Barbuda today on a quick visit to Venezuela that saw Antigua and Barbuda being formally inducted into ALBA Bank as a new member, as well as the signing of the Financing Agreement relating to the loan of US$15.8 million for injection into LIAT.

On his arrival PM Browne was met on the tarmac with an honour guard by Vice Minister Yuri Pimentel of the Ministry of Foreign Affairs, and he was then whisked away to his meetings in downtown Caracas.

The Governor of the Central Bank Mr Calixto Ortega welcomed PM Browne and stated how pleased he was that Antigua and Barbuda was becoming the seventh member of ALBA Bank, joining Venezuela, Cuba, Nicaragua, Dominica, St Vincent and the Grenadines and Bolivia.

During the meeting, PM Browne formally deposited the instrument that allowed Antigua and Barbuda to join the Bank, and he expressed his satisfaction at the good financial position of the Bank which would, in his view , engender trust and confidence. 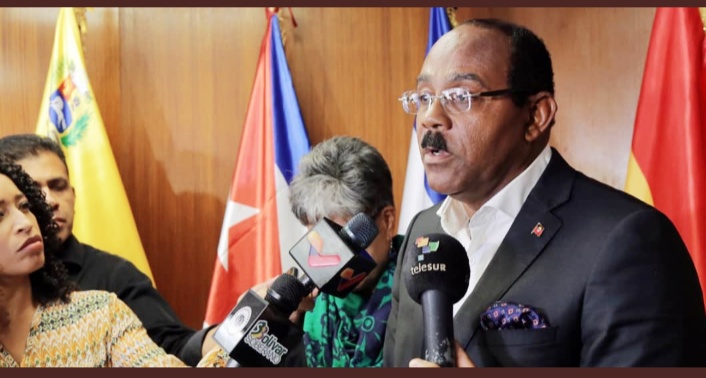 Both St Vincent and the Grenadines and Dominica, in offering their congratulations, indicated that they fully supported the ‘bold move’ by Antigua and Barbuda to join the Bank.

In signing the Financing Agreement, PM Browne indicated that although the Government of Antigua and Barbuda was assuming the financial liability, in fact the loan injection into LIAT would benefit the entire region that LIAT served.

‘LIAT is our infrastructure that links our scattered islands into a single economic space,’ Mr Browne said, ‘and it breathes oxygen into our tourism industry.’

After the meetings at the Central Bank, the Prime Minister had a bilateral meeting with the President of Venezuela, Nicolas Maduro Moros in the Miraflores Palace.

Both leaders reviewed the situation in Latin America and the Caribbean and agreed to work more closely together to achieve the goals of sustainable development in the region. Accompanying President Maduro in the meeting was Vice President Delcy Rodriguez; minister of foreign affairs Jorge Arreaza; and Vice Minister in the ministry of foreign affairs and chairman of the Executive Board of ALBA Bank Raul Li Causi.