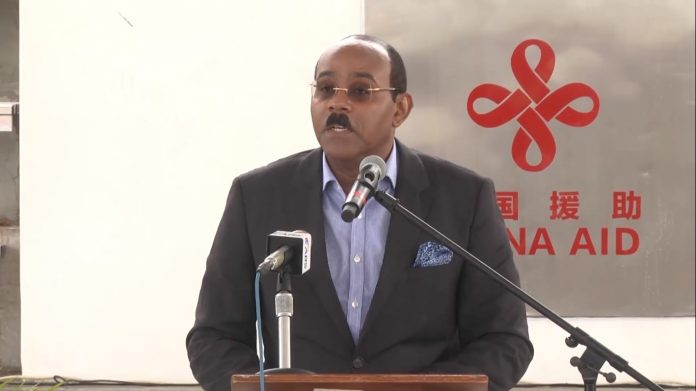 Prime Minister Gaston Browne has come out in defence of the Government and people of the Peoples Republic of China.

This is after statements made by the US secretary of State Mike Pompeo calling the Asian nation a predatory lender.

Prime Minister Browne was at the time speaking at the handover ceremony for the recently completed Grays Green Community Centre which was built by the Chinese through grant funding.

Browne says he has reached out to the US Secretary of State suggesting that the US should seek to offer better deals to developing countries than those offered by China.

“I can say firmly in the case of Antigua and Barbuda and its relationship with the People’s Republic of China that, that is not so. In fact, I went as far rebutting the Secretary of State Mike Pompeo to say to him that it is not so and called upon him and the United States to put a frame in place so that developing countries similia to what the People’s Republic of China is doing. I am pleased to announce that just yesterday there was a release coming from the OPEC organization in which they reckon that they will form this tropical arrangement between OPEC. Canada and the European Union to put together a better developmental paradigm to assist developing countries in the world.” he says.

Browne says the financing rate offered by China cannot be matched by the World Bank who is a developmental lending agency.

He says “they extend loans up to twenty years with a five years moratorium at 2% interest not even the World Bank as a developmental institution that type of concessional funding. Not even during a disaster because when Barbuda got decimated by Hurricane Irma the World Bank agreed to come to our rescue and we engaged them, they offered us a loan of up to 40 million dollars over 10years at 4%; we said to them, the term is too short interest too high. They said to us, if we want better terms, we had to get a donor to give us 20million dollars so that they can write down their terms probably maybe down to 1% over 20years.”

A number of projects locally that have been made possible through grant funding from China in an effort to demonstrate the willingness of China to assist developing countries globally.

PM Browne says, “this very project for which we are having the handing over ceremony was a grant in excess of 20million dollars grand compliments the government of the People’s Republic of China and they have made numerous grants in the past, the Sir Vivian Richards Stadium, that was a 70million dollars grant from the People’s Republic of China. Currently, there is two clinics being built; one in Villa and one in Wilikies at a cost in excess of 10million us dollars, grant monies again and the best is yet to come.”

The Prime Minister also alluded to monies made available to assist the island with its housing challenges.

“The People’s Republic of China has approved a grand of Ninety Million dollars to help us to provide social housing for the people of Antigua and Barbuda so we can build more resultants homes are those the practices of a predatory government? I say to you, those are the practices of a caring government, a government that understands the needs of the developing countries globally and would have gone the extra mile to help us to build capacity literally in all aspects of our development,” Browne says.

Many islands of the region are beneficiary of loans and other aids offered by the People’s Republic of China.