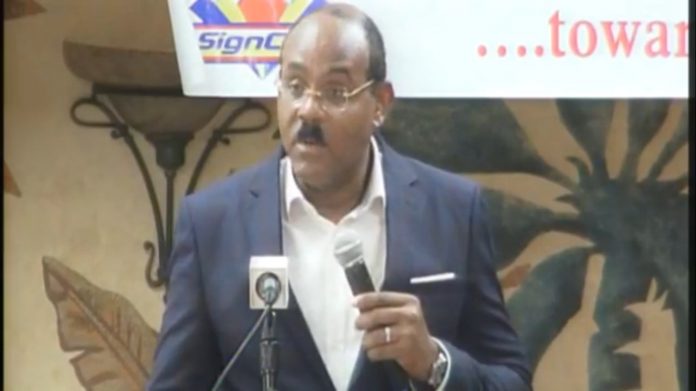 Antigua and Barbuda Prime Minister Gaston Browne Thursday called for the establishment of a global equity restoration tax by developed countries to assist Caribbean countries with a history of slavery, even as he maintained that seeking reparation was not a “handout”.

Addressing the one-day symposium exploring the historical roots of Western banks in the financing and profiteering from the enslavement of Africans and their descendants in the Diaspora, Browne said the  one per cent tax could be imposed on the world’s most wealthiest to help bring about a realignment of the global community.

“There should be the introduction of a global equity restoration tax on the wealthy, especially that one per cent to adjust the scourge of global inequality …as well as to cover reparatory organisations in the Caribbean.

“So I am making a call here for a global equity restoration tax. As I said before the one per cent controls nearly half of the US$85 trillion global economy and they should be made to pay this equity in the form of a restoration tax to restore global equity,” Browne told the symposium, making reference to the profits made by banks. Insurance companies and other European-based financial institutions during the period of slavery.

He dismissed the notion that the region’s call for reparation is wrong and that ‘we are wrongfully blaming European nations for our underdevelopment and consequently blaming a state of paralysis waiting for handout.

“But if you were to take the issue into context, if you were to give me a bankrupted company today with free labour I could turn that company into a viable entity. So it speaks to the importance of labour and the fact that they did not have to pay for labour here in the Caribbean, obviously it would have added to the profitability of their enterprises and they would have subsequently repatriated all of those profits to Europe leaving us poor and destitute.”

“There’s irrefutable evidence that our fore parents are owed trillions of dollars for their work over a period of 400 years with little or no compensation,” he said, adding that the region’s underdevelopment and financial vulnerability had been “created by centuries of exploitation…and colonisation.

“That is why Caribbean countries in all sectors driven by the CARICOM Reparation Commission have urged relevant governments in Europe to repair the debilitating socio-economic conditions, the destruction of resources and the dehumanisation and genocide of Caribbean peoples resulting from the slave trade….”

Browne insisted that the relevant European nations should provide reparation “not only because at last it would compensate for their development on the backs of our forbearers, but because it is the morally and legally thing required to restore equity and to help us to build resilience.

“And we should be clear, Reparation is not aid. It is not a gift. It is justice to correct the atrocities of the past that have left our people poor and vulnerable to diseases and the ravages of climate change,” he added.

The symposium, which is being organised by the CARICOM Reparations Commission (CRC) in collaboration with the Centre for Reparation Research (CRR) and the Antigua and Barbuda Reparations Support Commission, is also seeking to identify the role of Western banks in the support and expansion of colonial and neo-colonial rule in the Caribbean.

It is being held under the theme “Western Banking, Colonialism and Reparations”.

CRC chairman and Vice Chancellor of the University of the West Indies (UWI), Sir Hilary Beckles, said that the symposium was taking place at a time of new development paradigm evolving globally.

“The world is still trying to distance itself from the 18th century paradigm of development, where countries with military and political power or primarily military power can pursue their development through the use of arms at the expense of all our people and nations.”

He said these countries felt they could colonise, enslave, and terrorise “in order to extract resources from the vast stretch of humanity for their own development.

Sir Hilary said that these are among the new foundations of an evolving global development paradigm rejecting ideologically, intellectually the structures of the past that have allowed Western Europe to run rough shot over the rest of humanity.

Sir Hilary said that the new situation places the Caribbean and other countries ravaged by slavery in the vanguard of the attempt “to articulate a new global vision for development around the concepts of ethical relationships and equitable relationships”.

He said all institutions, including churches, governments, universities, financial institutions that are projecting themselves as excellent institutions “when tested upon the criterion of ethical characteristics, having their roots in slavery and colonisation and having refused to confront and atone and repair the legacies of their own behaviour they are coming up short”.

The symposium marks the second anniversary of the launch of the CRR. Over the past two years the CRR has conducted several research and publishing projects, panel discussions, media interviews and public fora on various reparatory justice topics.

The symposium comes just weeks after the signing of an historic Memorandum of Understanding (MOU) between the University of Glasgow and the UWI whereby the two universities agreed to establish the Glasgow-Caribbean Centre for Development Research.