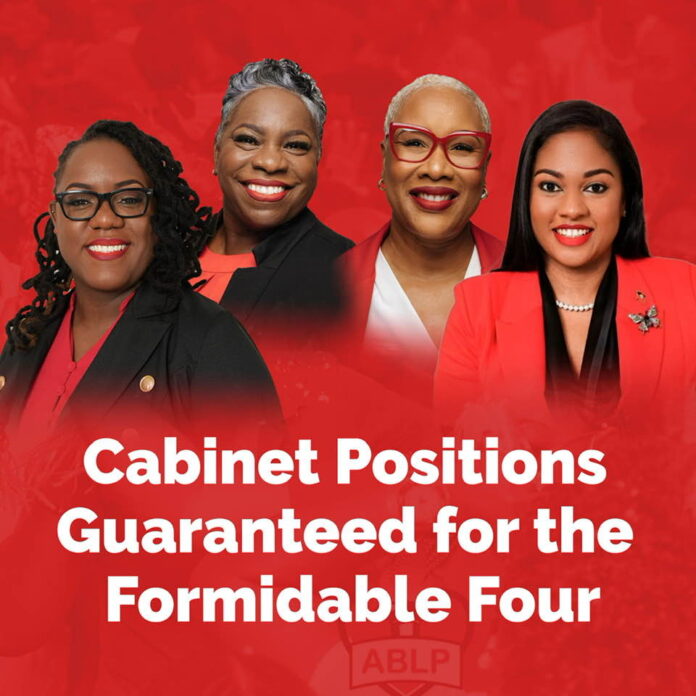 In a self-professed bid to narrow the gender gap and contribute to the growth of the nation’s women in politics, Prime Minister Gaston Browne has assured four female ABLP candidates, running for seats in the next general election, of Cabinet positions should they be successful at the polls.

Speaking on a local media platform Monday evening, Browne noted that two of said candidates – his wife Maria Browne and Samantha Marshall – are already serving as government ministers, saying they had already proven their worth to the nation.

He added that the other two – Senators Gail Christian and Knacyntar Nedd-Charles – are showing signs that they are ready to serve the country in a similar capacity.

“It’s not very often I go as far as guaranteeing Cabinet positions, but I’ll say here that in the case of Samantha Marshall – who is the Labour Party female pioneer in the Lower House – I mean, her position in the Cabinet is assured. Minister [Maria] Browne has a great seat in the Cabinet, so evidently, her position is also assured.

“Now, we have two candidates … we know for sure that Comrade Gail, based on empirical evidence, is winning, and we haven’t polled Barbuda, but we have information to confirm that Comrade Knacyntar Nedd is definitely on her way into the Lower House,” Browne claimed.

“I know that I speak for all of the ladies when I say that we’re equal to the task. We’ll make the party proud and we’ll make the nation proud as we move ahead,” Senator Christian replied.

Calls for the inclusion of more women in local politics and political leadership have been repeated quite loudly over the past several years, as many consider the domination of men to be both archaic and unfair, considering the global socio-political climate.

Massiah is one of just four women to have ever been elected and appointed government minister in Antigua and Barbuda’s 41-year history of political independence, alongside then fellow UPP candidate Dr Jacqui Quinn, and the aforementioned Browne and Marshall of the Antigua and Barbuda Labour Party (ABLP).

A former Minister of Education and Labour, Dr Quinn made history back in 2004 when she became the first woman in the twin islands to be elected to the Lower House of Parliament. 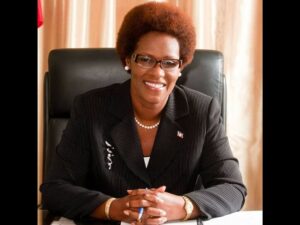 Dr Jacqui Quinn made history in 2004 when she became the first woman in the twin island state to be elected to the Lower House of Parliament, in the UPP administration (Photo courtesy Facebook)

And a year later, she made more history, serving as the first woman Acting Prime Minister in the nation’s history, in the temporary absence of then Prime Minister, Baldwin Spencer.

Since then, the pickings have been obviously slim for women politicians, but the issue is not endemic to Antigua and Barbuda and is a recurring theme throughout much of the sub-region.

In Grenada, for example, only three women – namely, Senator Claudette Joseph – Attorney General and Minister for Legal Affairs and Consumer Affairs; Senator Gloria Thomas – Minister of State with responsibility for Social Development and Gender Affairs; and Kerryne James – Minister for Climate Resilience, the Environment and Renewable Energy – have been named in the Dickon Mitchell-led Cabinet.

Dominica is leading the way in the subregion with five women in ministerial positions, both St Lucia and St Kitts and Nevis have two women in their Cabinet, and there are no women currently serving in the Cabinet in Montserrat or St Vincent and the Grenadines.

The reality is a bit brighter in countries like Guyana and Trinidad and Tobago where gender equity policies have been implemented, resulting in a more commendable ratio of women to men in leadership positions.

And right here in Antigua and Barbuda, strides have been made in the Upper House to bring the ratio there to a more respectable place – five women currently sit as Government Senators, compared to three men, while the Senate President and the Leader of Government Business are also women.

“You’d recognise that we had achieved gender equity in the Senate, and that was not by accident. That’s based on our commitment to ensure that there’s gender equity,” Browne said in this regard.

There is also one woman serving as Opposition Senator, along with women in the Independent Senator and Barbuda Senator roles.

The country’s main opposition party, the UPP, is expected to field three women candidates in the upcoming general election, compared to the incumbent ABLP’s four.