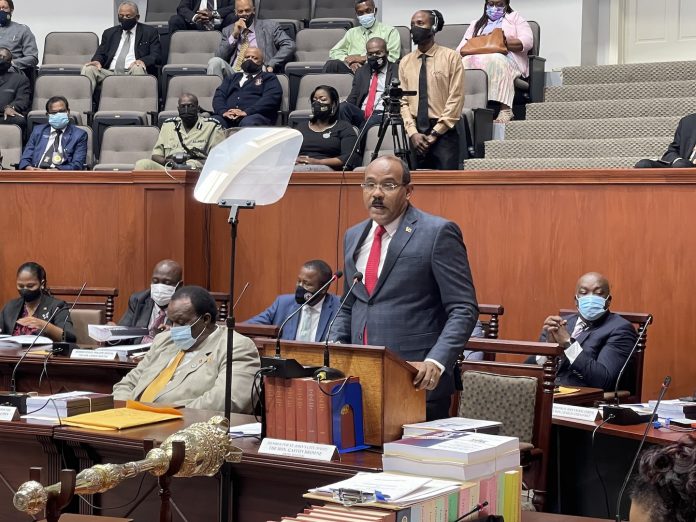 Prime Minister the Hon. Gaston Browne on Thursday presented his government’s 2021 Budget to the Houses of Parliament tagged “Maintaining a Healthy Nation and Restoring a Vibrant Economy.”

Against the challenges of the COVID-19 Pandemic that is affecting the world, Prime Minister Browne noted that his government is aware that many people are worried that their jobs have been lost; that their savings are depleting; and that they are living in suspense and uncertainty.

“Everyone wants an end to the Pandemic and a swift return to life as it was before, including employment, festive gatherings, congregating to pray in Church, attending sports events, and just simply being able to commune with friends and family,” he said.  He however outlined that on the health aspect, the government has done better than most to keep the people of our country safe.

“Today, we are amongst the few countries in the world with a low rate of death, a low rate of infections, a high rate of recovery, and no known community spread.

That is an achievement of which we should all be proud,” PM Browne said.

The country’s leader also pointed out that while 2021 presents many opportunities for growth and development with the prospects presented by the delivery of COVID-19 vaccines, there are still  tough periods ahead, particularly the first two quarters of this year.

“It is that period we must navigate with resolve and determination.  We must remain vigilant and stay the course, by continuing to exercise personal responsibility, as we prepare for our economic recovery.  It is the strategy for riding out the present circumstances and readying the path for the future, that I will set out in the Budget Statement today.”

The country’s leader said that Antigua and Barbuda was poised for massive development and social progress.  This he said was stymied by the COVID-19 Pandemic.

“We had reduced unemployment to a single digit for the first time in over a decade.

And, public and private sector investment was set to reach $2 billion, generating an economic boom, creating more jobs, and increasing income for all.  All these rewarding conditions, Mr. Speaker, were created by the constructive and productive policies that our government vigorously pursued, with the strong support of the people of Antigua and Barbuda.  We were on the cusp of a great take-off,” he said.

“We were not to know, that one tiny microbe – external to our country and invisible to the naked eye – would bring all nations, rich and poor, to their knees: infecting over 100 million persons globally and killing more than 2.2 million.  No one could foresee the wreckage of economies across the world, sparing none,” the Prime Minister outlined.

Prime Minister Browne noted that were it not for that five-year period of robust growth, engendered by his Government’s policies and private and public sector investments, the nation could not have withstood the steep decline experienced in 2020.

“Our country was sustained by the previous five years’ successful performance that helped to cushion the impact of the pandemic.  We saw similar resilience when our country recovered from the devastating impact of Hurricane Irma in 2017, to become the world’s tenth fastest growing economy in 2018,” he said.

He noted that 2021 will see Antigua and Barbuda’s economy getting back on track.  “We have a track record of recovering from crises.  We have done it before.

And, I assure this House and this Nation, that we shall do it again.  Antigua and Barbuda will rise and recover rapidly!  Let there be no shadow of doubt about it!”