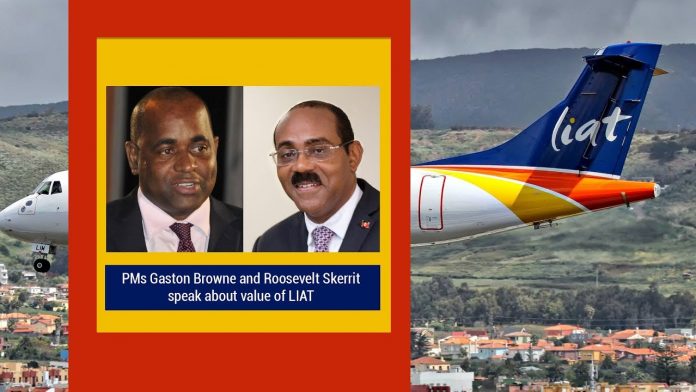 Dominica News Online- Although St Johns has not received any commitment from Dominica’s Prime Minister Roosevelt Skerrit about a proposed debt liability write off for LIAT, Antigua and Barbuda’s Prime Minister Gaston Browne said he is confident that the answer from Roseau will be “yes”

All governments in the region have been asked to write off debts owed by the regional carrier, which accounts for nearly a third of the over EC$300 million in liabilities on the airline’s books.

Browne said, so far, only St Vincent and the Grenadines Prime Minister, Dr Ralph Gonsalves, has committed officially to the undertaking.

“We have not heard formally from Dr Gonsalves as yet but he has given an undertaking to write off the liability of 14 million and we are appreciative that he is standing in solidarity with us,” Browne said over the weekend.

He said where Dominica is concerned, “I am pretty sure Prime Minister Skerrit will be writing of his government arrears. We are now waiting for Barbados and other countries in the region.”

In July, a high court in Antigua and Barbuda granted a petition allowing for the reorganization of the airline, the appointment of an administrator as well as staying all proceedings relating to the liquidation of the company.

The High Court in St John’s granted the petition as the Gaston Browne administration moved ahead with its efforts to reorganize the airline which owes creditors in excess of EC$100 million.

“I don’t think it’s a hard decision to make because if it went into liquidation, they would be getting nothing anyway…I don’t see any reason why anyone would want to delay or deny the decision,” Browne said.

The Barbados and St Vincent and the Grenadines governments, former shareholders in the airline, had in July agreed to sell their shares, to accommodate the new reorganization plan outlined by Antigua and Barbuda.

Dominica is the other major shareholder of LIAT.

Attempts by Dominica News Online (DNO) to obtain a comment from Prime Minister Skerrit, have s far been unsuccessful.