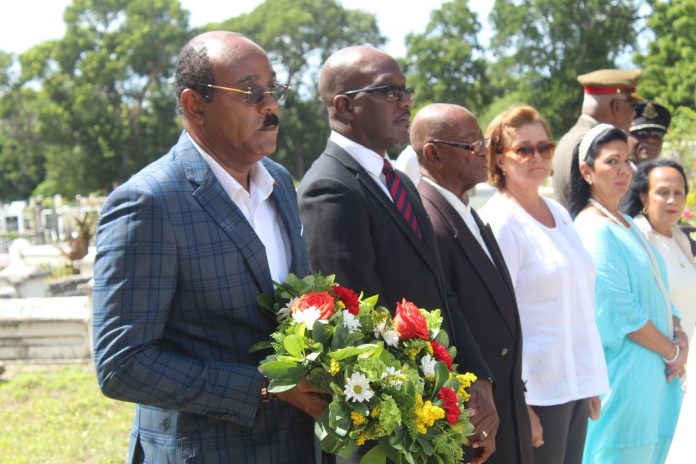 The inheritance of resilience, patriotism, national pride and civic pride created the central theme for Prime Minister’s Browne 2019 National Heroes Day Message. PM Browne commenced his address by recognizing Antigua and Barbuda’s national heroes and explained the magnitude of their contribution to national development.  “Today, we celebrate the contributions of six transcendent heroes, just like our forebears over many centuries, these individuals would have inherited many values, significant values which they themselves applied towards nation-building,” Prime Minister Gaston Browne said.

Remarking on the current developmental progress of Antigua and Barbuda, PM Browne cautioned those who may try to undermine the contribution of those in the Civil Service, especially nurses, doctors, teachers, and the police. “I say to all of you, we value your contribution and we encourage you to continue to contribute to nation-building because, ultimately, it is your contribution that would have kept this country afloat,” Prime Minister declared.

Focusing on the importance of unification, PM Browne spoke openly about the differences in political affiliations and called for togetherness and respect leading up to the country’s independence.

The Prime Minister also called for the National Heroes Day to become a National Holiday. Noting the importance of celebrating those who have paved the path for national development.

Civic pride through cleanliness, community development, and collective responsibilitywere also among the call for action Prime Minister Browne highlighted in his address.

In closing, the Prime Minister reiterated his call for unity moving forward, more specifically, unity on Independence Day. “I call for camaraderie, not for division. I call for the upliftment of this country not to tear down our country.  I call for unity and I call for the collective efforts of all Antiguans and Barbudans,” Browne ended.