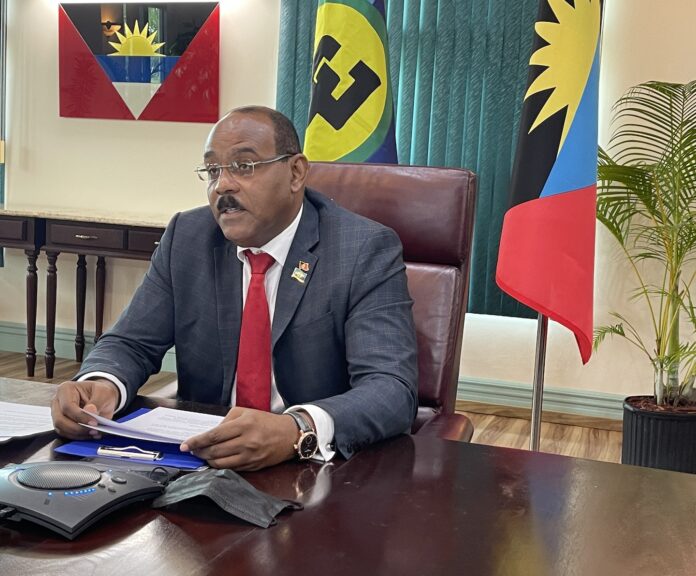 Prime Minister of Antigua and Barbuda and Chairman of the Caribbean Community, CARICOM the Hon. Gaston Browne has called on the grouping of African and Caribbean countries to harness their powers to demand change in the international system.

Prime Minister Browne was speaking on Tuesday during the historic first Africa- CARICOM Summit, held under the theme Unity Across Continents and Oceans: Opportunities for deepening integration.

Calling for the summit to be an annual event, Prime Minister Browne said that Africa and CARICOM have cooperated and collaborated in the past and in order to harness its global bargaining power, they must act harmoniously.

“Between the nations of the African Union and CARICOM, we are a population of approximately 1.4 billion people, with great natural and wealth-creating resources including oil, gas, agriculture, minerals, forestry, tourism, fisheries and much more.  We are the suppliers of vital commodities to the global community, and a strong market for the goods and services of Europe and North America.  Additionally, together we have the voting power of 69 nations in the United Nations and all its subsidiary organizations, including the World Trade Organization.  We have global bargaining power.  But only if  use it effectively,” he said.

Prime Minister Browne during his presentation called for a repeat of the Africa-CARICOM summit on September 7th annually to analyze the global situation and the group’s place within it; to discuss initiatives and programmes; and to authorize joint actions.

“Let us now create the pathways of accord between Africa and the Caribbean – an accord worthy of our historic and contemporary struggles to overcome the legacy of racism, colonialism, exploitation and global inequities.  We are the branches of a single tree created from the same roots and as Caribbeaners, we look forward to that Welcomed return as repatriated Africans. Let us, as that one tree, reach to the skies together – strong, resilient, and unshakeable,” said Prime Minister Browne.

Prime Minister Browne also spoke about the prevalence of inequity in relation to vaccination production and accessibility, noting that the grouping which he calls the Group of 69; acting together can create a change.

“We must establish structures of cooperation to promote our mutual socio-economic interests; increasing investment and trade, and people to people exchanges between Africa and the Caribbean. We should resist being pushed to the margins of international decision-making and collaborate on decisions to restructure the global financial architecture, on global taxation, derisking, climate change and reparations, among others,” Prime Minister Browne said.

He pointed out that the success with the African Union’s Medical Supplies platform (AMSP), which provided life-saving vaccines to the Caribbean people; has shown that they have the capacity to cooperate and collaborate.

Prime Minister Browne’s comments received repeated commendation from the Chairperson of the Summit, His Excellency Uhuru Kenyatta, President of the Republic of Kenya; along with the Prime Ministers of Barbados and Saint Vincent and the Grenadines, the Hon. Mia Motley and Dr the Hon. Ralph Gonsalves.

Among other issues, the Summit addressed areas for collaboration and cooperation, trade and investment, the establishment of a permanent CARICOM-AU Trade Forum as the way forward, transportation and tourism and the role of the diaspora as the Sixth Region of Africa.