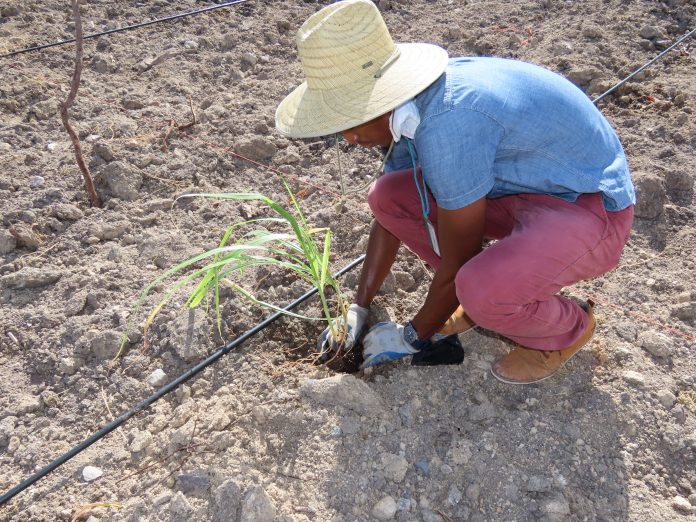 Antigua and Barbuda is currently experiencing a prolonged period of drought
which is not only affecting the people of the country, but the agriculture sector as
well, specifically the livestock industry.

Livestock farmers would normally depend on the wild growth of certain grass
species to feed their animals but with little or no rain which is restricting the
growth of said feed, farmers are sometimes forced to spend large sums of money
to buy feed for their animals.

However, a collaborative project is now underway with the Australian High
Commission Direct Aid Programme, the Ministry of Agriculture, the Inter-
American Institute for Cooperation on Agriculture (IICA) and the Caribbean
Research and Development Institute (CARDI), to help ease the strain being
experienced by livestock farmers, by providing drought tolerant forages for
livestock animals.

The primary beneficiaries of this project will be the National Livestock Association
and in turn, they will aid members in establishing plots similar to the ones, which
are currently being done.

The project includes planting of variety forages at four (4) different locations
which include; Livestock Station at Paynters, BBC in Seaview Farm, Glanvilles and
the Cades Bay area.

Earlier this week, planting of the forages was well underway at the Livestock
Station in Paynters to include 55 Mulberry Plants, 55 Gliricidia, 65 Dwarf Elephant
Grass, 150 Chrysopogan and 180 African Starr Grass.

The plot was divided into four (4) equal parts and the forages were planted ten
(10) feet apart.

CARDI Technician Mr. Bradbury Browne, explained that to support the project in
the extreme dry conditions, the team had to design a simple irrigation system to
maintain the forages.

Such a system is very crucial especially since the forages have just been
transplanted and have to be watered daily until they are fully established and
there is new growth.

When new growth occurs, the irrigation cycle will be adjusted to every other day.

This is highly dependent on the weather conditions; once there is steady rainfall,
the system will be activated once a week.

National Specialist for IICA, Mr. Craig Thomas thinks that collaboration on this
project is very important as it allows agencies to work together to provide limited
resources to livestock farmers.

“The partnership between CARDI and IICA’ this is all about managing limited
resources and you would have seen what we would have done here today
because of collaboration,” stated Mr. Thomas.

The provision of the nutritious drought tolerant forages will help farmers to
secure feed for animals before, during and after the drought season by
establishing similar plots livestock farms.

“The ultimate objective is for farmers in Antigua and Barbuda to come to Paynters
and the other plots to get planting material so that they can establish plots similar
to what we have here,” stated Mr. Thomas.

Agriculture Assistant Three (3) at the Experimental Station at Dunbars, Victor
Harris, explained how beneficial this project is to the livestock farmers on the
island during this climatic condition.

“We provide demonstration plots for farmers, livestock owners that rare animals
like sheep, cattle, goats, those kinds of animals that utilize forages so that we can
try to bring down as much as possible, the cost of production in buying grain and
these kinds of supplemental feed,” stated Mr. Harris.

Livestock Division Officer, Tadius Spencer explains that not only will these forages
lower the cost of production for livestock farmers, but also, due to the highly
nutritious content of the feed, farmers can expect to see a change in what they
get from their animals.

A similar exercise will be carried out at the plot in Glanville’s to be followed by
Cades Bay.