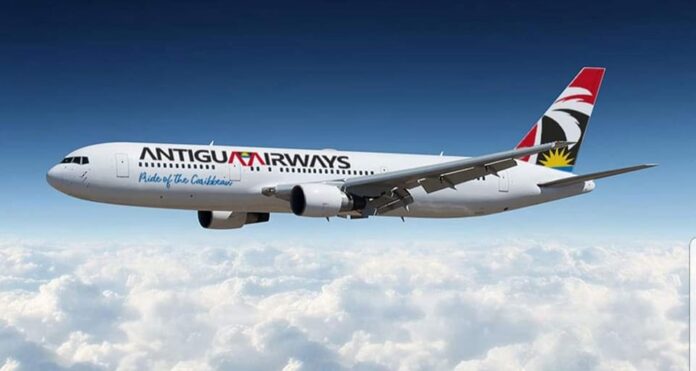 The government has confirmed that plans are on track for the launch of Antigua Airways by the first week of November at the very latest.

The airline was first announced in July by Prime Minister Gaston Browne who said an October start was the goal.

The new airline, which will operate flights to Nigeria, Ghana and Canada, will be based in Antigua and Barbuda.

Other flights to countries in West Africa will be added as the airline grows. The government of Antigua and Barbuda is a part owner in the company and will enjoy 20 percent of the profits generated.

The majority shareholders – a Nigerian investment group – will receive 80 percent of Antigua Airways’ profits. Ambassador Lionel Hurst recently confirmed that plans ahead of the official launch of the airline are being finalised and added that Antigua Airways will begin offering service from the V. C. Bird International Airport very shortly. “I can offer you the assurance that we’re going to see Antigua Airways touchdown at the V. C. Bird International Airport sometime within the next five weeks.

“They are working out all kinds of logistics – not only baggage handling, fuel, permission to fly into Antiguan airspace and so on, they’re working all that out, but you know when they leave Antigua, the plan is to fly on to Toronto before going back to the African continent, and so they must work that in as well,” he explained. Hurst also confirmed that the Cabinet received a positive update on the progress of plans leading up to the launch of Antigua Airways as recently as last Wednesday. “It’s going to be really nice, I can assure you.

From what has been announced in Cabinet yesterday, it’s going to be a really nice event when that airline leaves the African continent, the homeland of the largest number of descendants of Antiguans and Barbudans. It will be something to applaud.” Antigua Airways plans to operate a Boeing 767- 300ER in a 16 business and 251 economy configuration.

The aircraft, which have been secured under a wet lease arrangement, will offer amenities including a modernised interior with touchscreen in-flight entertainment and charging ports.

To entice travellers to use the service, a members loyalty programme will be offered, although the details of this enhancement has not yet been revealed. Antigua Airways is also establishing a “Visa on Arrival Programme” with the African nations it will serve, which will allow travellers to bypass the process of securing a VISA ahead of their trip through third parties.

The launch of Antigua Airways is also expected to pump much needed business into LIAT, as the hope is to establish timely connections for its passengers to other Caribbean islands via the V. C. Bird International Airport homebase.

The launch of the new airline has not been greeted warmly by all, however, and critics are predicting that the airline will be fraught with issues, and perhaps, even failure.

The pronouncements of these harbingers of doom have not shaken the resolve of Prime Minister Gaston Browne and his administration, who continue to express confidence in the venture’s potential for success.

In Parliament on Thursday, the prime minister said that unlike other ventures which have attempted to offer service to West Africa that failed, the plan for Antigua Airways involves sound research, a carefully thought-out plan for the growth of the business and a solid network of local and international resources.

He also made it clear that Antigua and Barbuda has nothing to lose as the government has not invested financially in the airline. “What we did do is to list it as a CIP (Citizen by Investment Programme) project and one in which we have allocated up to ten CIP files, and if and when they are subscribed, then we will get, I believe, about 20 percent of the shares. “My understanding is that the service will start as a charter service. They are also trying to have a sustaining relationship with LIAT 2020 when we would have operationalised LIAT 2020, and we have been told so far that the arrangements to lease the plane and to start operating are on target,” Browne told the Parliament.

Last month, Minister of Tourism, Charles Fernandez, said that Antigua Airways is expected to offer three flights per week out of Antigua and Barbuda at its inception. (POINTE XPRESS)