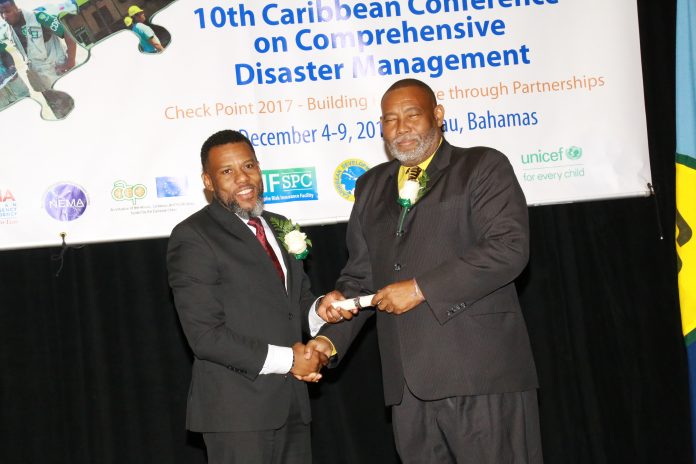 Director of the National Office of Disaster Services (NODS) in Antigua and Barbuda, Philmore Mullin, was also presented the CDEMA Lifetime Achievement Award for his distinguished career in Caribbean disaster management for over 25 years.

He was recognised for his leadership, expertise, dedication and commitment to disaster management planning, execution and response in the region.

The award was presented at the closing ceremony, Awards & Gala Dinner of the 10th Caribbean Conference on Comprehensive Disaster Management (CDM) held on Friday, December 8, 2017, at Melia Nassau Beach Resort.

The St Catherine Parish Council, Jamaica and Mikael Maanstroem of GRAMMIC Assistance AB/Knowledge Agency Europe, were both presented the CDEMA Recognition Award for having consistently participated and supported the CDM Conferences since inception in 2006.

The Jeremy Collymore Award was launched in June 2017 and seeks to support innovative and insightful research for improved emergency response and Disaster Risk Management (DRM) in the CDEMA Participating States.

Collymore presented the award to Dr. Thompson during the Awards Ceremony and she also receives a US$5000 grant towards her research, which will be presented at the 11th CDM Conference in 2019.

The CDEMA Council and Lifetime Achievement Awards were bestowed upon General Arthurs for his unwavering dedication and passion in serving the region for over twenty (20) years. General Arthurs, former CDEMA’s Emergency Operations Specialist, has been at the frontier of disaster response operations in every major regional event including; Hurricanes Mitch in 1998, Keith in 2000, Iris in 2001, Ivan in 2004, Joaquin and Erika in 2015, Matthew in 2016 and most recently, Irma and Maria in 2017.  After the great earthquake of 2010 which devastated Haiti, he was CARICOM’s representative on the ground for almost six (6) weeks, performing the role of Special Coordinator. General Arthurs successfully guided the CARICOM Legacy projects in Leogane in Haiti in 2010 and again in Les Cayes in 2016.