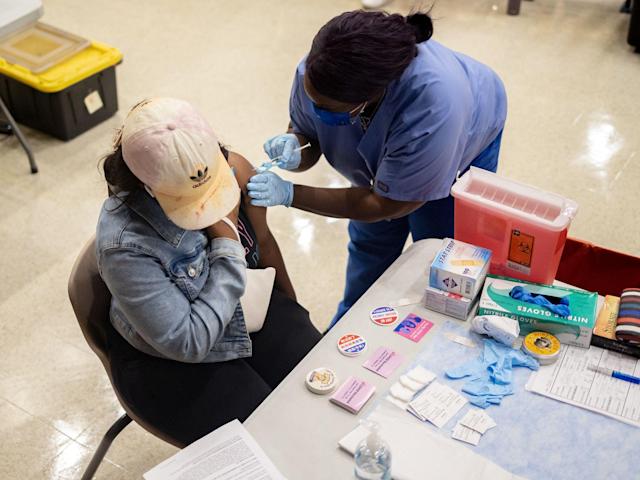 NBC NEWS: Pfizer and BioNTech said Monday that the companies’ two-dose Covid-19 vaccine was safe and showed a “robust” antibody response in children ages 5 to 11.

Based on data collected in a trial that included more than 2,000 children, Pfizer and its German partner, BioNTech, said in a press release that the vaccine was “safe, well tolerated, and showed robust neutralizing antibody responses” for this age group. No Covid vaccines have yet been authorized or approved for use in children under 12.

The children in the trial were given two smaller doses of the vaccine than those given to people 12 and older, according to the release. The companies said that it produced antibody responses, and side effects, in children that were comparable to those seen in a study of people 16 to 25 who received the full dose of the vaccine.

More than 466.5 million Covid vaccine doses have been given in the United States, according to the Centers for Disease Control and Prevention. The vaccine developed by Pfizer and BioNTech is one of three in use in the U.S., along with Moderna’s two-dose vaccine and Johnson & Johnson’s single shot vaccine.

Around 12.7 million children under the age of 18, or around 54 percent of 12- to 17-year-olds, have received at least one dose of a Covid vaccine, according to an American Academy of Pediatrics analysis of CDC data as of Sept. 15.

In August, the academy recommended against giving the vaccine to children under 12 until it was authorized by the Food and Drug Administration.

“We intend to submit the data by the end of the month and then, of course, it will be up to the FDA to review that data and determine whether the vaccine can be released for broad use,” Dr. Bill Gruber, Pfizer’s senior vice president of vaccine clinical research and development, as well as a pediatrician, told NBC’s “TODAY” show. “We hope that will go expeditiously.”

Pfizer and BioNTech said they will now submit their data from the trial to the FDA for emergency use authorization. They are also testing the vaccine in children under 5 and expect results from that trial by the end of the year.

Pfizer first applied for emergency use authorization for its vaccine for adults in November. The FDA granted full approval to the two-dose vaccine in August for those ages 16 and older. It was the first Covid vaccine to pass this final regulatory hurdle. The vaccine is currently given to 12-to-15-year-olds under the FDA’s emergency use authorization.

The news comes as Covid cases have surged in the U.S. in recent months. In total, nearly 5.3 million children in the U.S. have tested positive for Covid, or around 15 percent of all cases as of Sept. 9, according to the American Academy of Pediatrics. More than 243,000 cases were added that week alone, the second highest number of child cases recorded in a week since the pandemic began.

Concerned with rising cases in children, the head of the academy wrote in August to the FDA to work “aggressively” toward authorizing a Covid vaccine for children under age 12.

Johnson & Johnson and Moderna, whose Covid vaccines are in use in the U.S., are also researching the effects of their shots in pediatric trials.