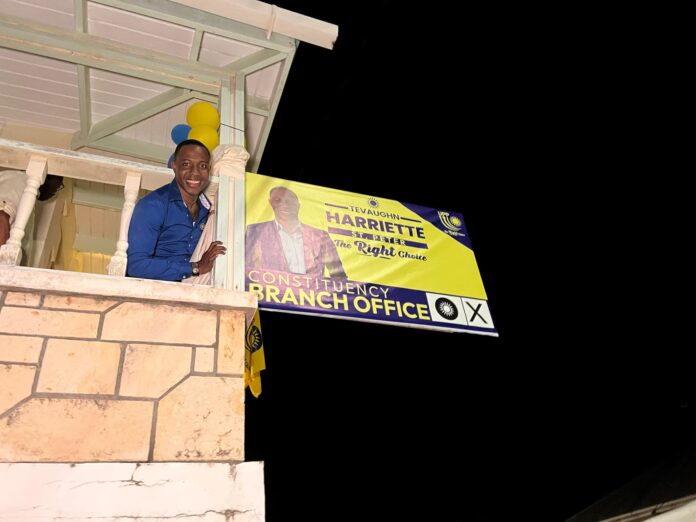 The St. Peter branch of the United Progressive Party (UPP) formally launched its constituency branch office last Friday evening, October 21, and Candidate Tevaugh Harriette says he could not be prouder of this accomplishment.

“As 6:30 p.m. approached, there was a feeling of both anxiety and excitement; and as if some higher power knew what was needed, a cool and settling drizzle came to help create a sense of calm,” says Harriette in describing the evening.

He reports that the event began in the usual fashion, with the robust singing of the national anthem by the audience and then a spirited blessing by Pastor Paul Andrew, the Party’s Chaplain.

The proceedings were not without minor technical issues, however, which caused a slight deviation from the schedule.  But these did not hamper the delivery of a presentation by branch member Dotsie Isaac, known nationally for her poetry, Harriette says.

Nor did they dampen the words of encouragement and congratulations from the Leader of the Opposition and Deputy Political Leader Jamale Pringle, who said he continues to be impressed by his young colleague’s commitment to the objectives of the Redeem Team, as the UPP’s slate is called.

With technical issues resolved, the audience was treated to two special numbers selected by the Branch as appropriate for the occasion:  The song Hypocrites, a 2022 calypso from Peetron, an up-and-coming constituent, while Harriette’s own presentation  was followed by Whitney Houston’s One Moment in Time.

Audience members and Harriette’s fellow candidates were full of praise for his speech, which traced his St. Peter association – from his birth in Parham to his education at the Pares Secondary School and his stellar football career with the local club and national team.

Harriette – dubbed “Peter Blue” for the occasion – spoke of the current condition of the constituency and its people; his hopes for a turnaround in the fortunes and status of St. Peter; and his commitment to restoring Parham, in particular, to its former glory.

He also assured his audience that he is the right person, and the UPP is the right choice, to make these things happen.

Winding down the event was Political Leader Harold Lovell, who gave Harriette – the youngest member of the slate – his endorsement and delivered the charge.

Lovell particularly noted how much and how quickly Harriette had matured; how he had demonstrated his abilities, both as a team player and leader; and the high hopes he has for the Candidate’s success in the coming election.

The ceremony wrapped with the formal ribbon-cutting and unveiling of the branch office sign and Candidate’s banners, followed by the vote of thanks from the St. Peter’s Branch Chairman, Daverson Welsh. 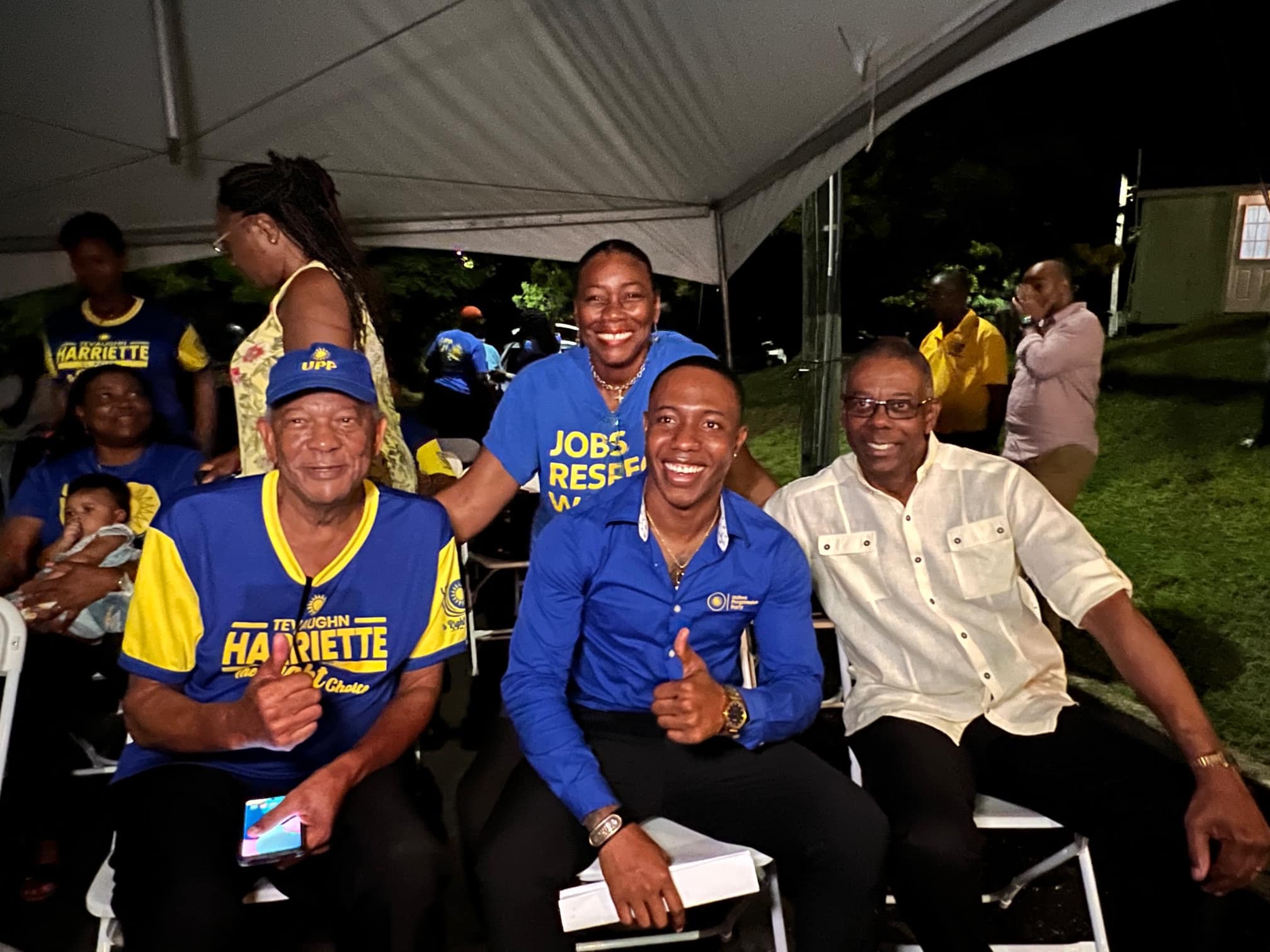 The event, which ended with refreshments and music, was also supported by former Prime Minister Dr. Baldwin Spencer and former Minister of Education Dr. Jacqui Quinn, as well as Harriette’s campaign managers and representatives of the Party’s Executive, Women’s Forum, and Progressive Youth.

Branch members and organizers of the launch reported, on Friday night, that they were “very pleased” with how things had turned out, and they gave special thanks to their benefactor, Earl “Desta Jah” Gardner, and emcees Errianne Weste and Joan McEwen.

The office is located on Station Street in Parham. 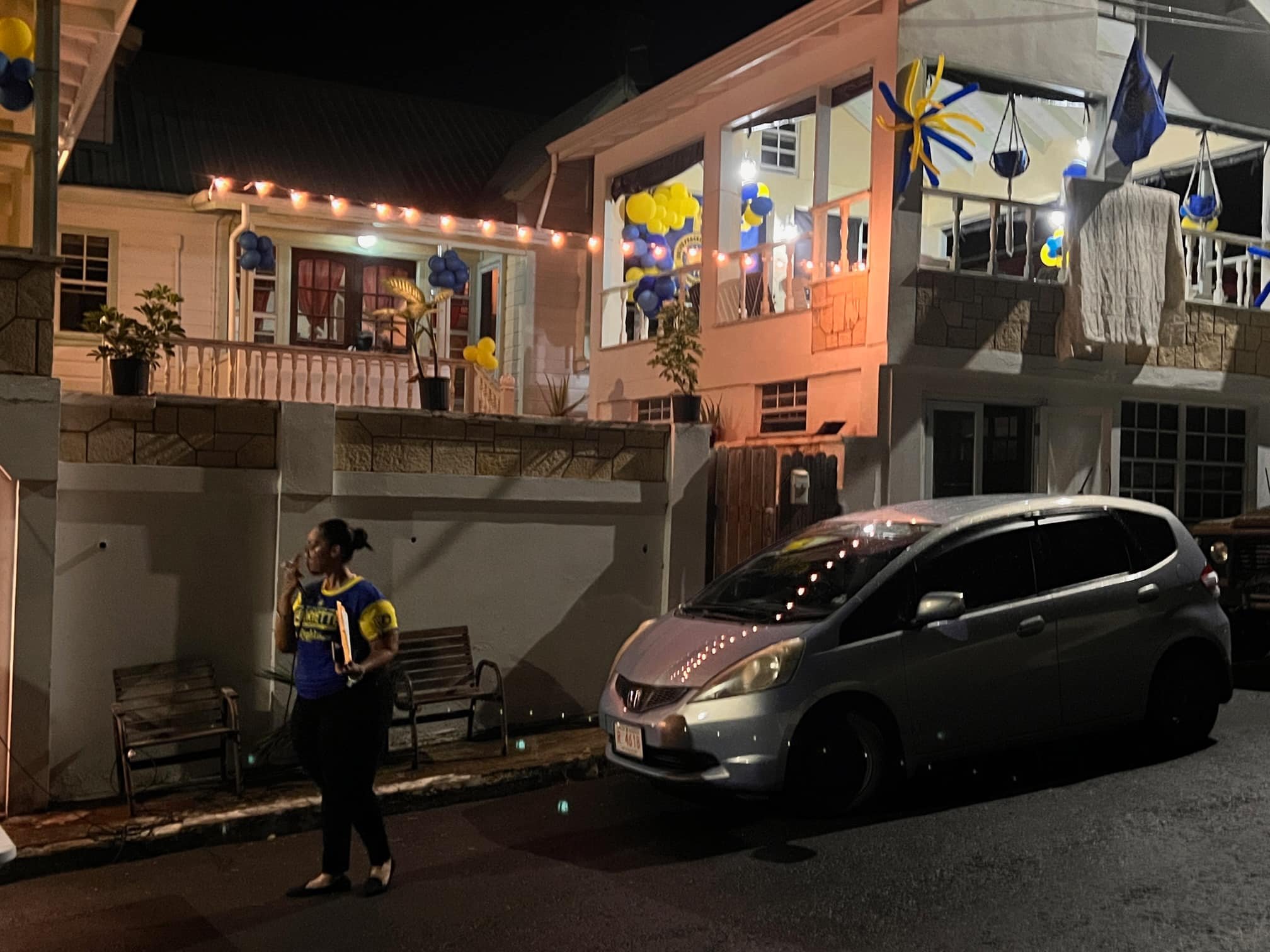