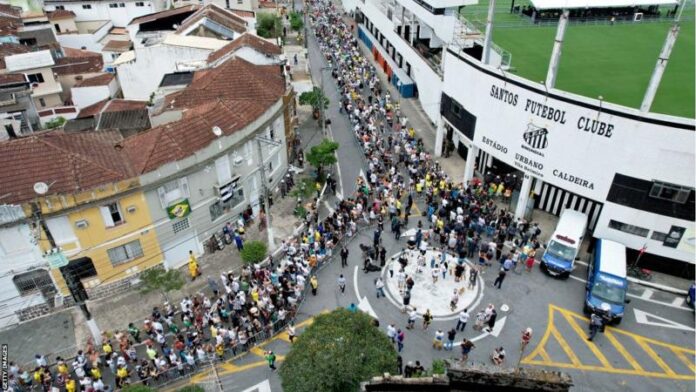 Thousands of mourners have gathered to pay their respects to Brazil legend Pele who is lying in state at the ground of his former club Santos.

Pele’s coffin was placed in the centre of the pitch at the Urbano Caldeira stadium in Sao Paulo, with fans filling the stands and lining the streets.

The three-time World Cup winner died at the age of 82 on December 29.

There will be a procession through the streets of Santos to a private family burial on Tuesday.

Pele, arguably the world’s greatest ever player, had been undergoing treatment for colon cancer since 2021.

“We’re going to ask every country in the world to name one of their football stadiums with the name of Pele,” said Fifa President Gianni Infantino, who attended the memorial.

Thousands of fans gathered on the streets as the hearse arrived at the stadium on Monday morning, with some queuing overnight to see the coffin.

“We are talking about a global icon, so this is going to be a huge global occasion,” South American football journalist Tim Vickery told BBC 5 Live.

“Pele is a source of huge pride for Brazil. He is not from Santos but it is a city that he made his home, and he is theirs – but he also belongs to the world.”

Brazilian journalist Ricardo Seyton, who worked closely with Pele during his career, said it was going to be an “intense” day.

“It is the people of the streets, the public, who are making this day so beautiful,” he told BBC 5 Live.

“It is amazing to see people in football shirts from all around the world – that is the legend of Pele.”