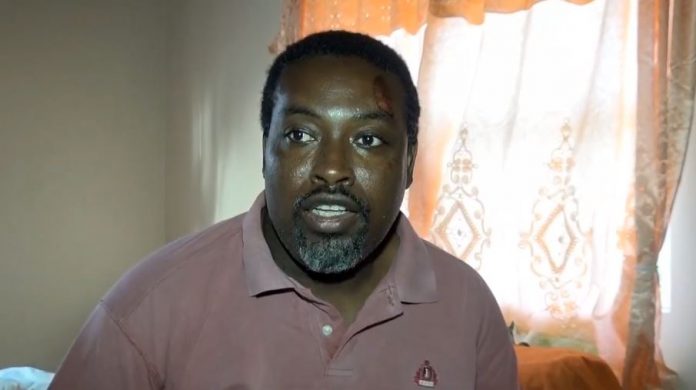 An accident on the Friars Hill Road that has landed Trevor Thomas, a 46-year-old man with three children, in the hospital is now a cautionary tale for other pedestrians.

According to police reports, the accident occurred at about 7 p.m. on Wednesday, May 27, in the vicinity of Billy’s Food Mart. Thomas attempted to cross and was struck by an elderly driver on a portion of the road that is still under construction.

Thomas, who has been released from hospital since Thursday, is appealing to all pedestrians to be careful when crossing the road.

He recalls the incident saying, “I came out the gate, saw that there were no vehicles coming from up the hill, looked and saw the one coming from the gas station direction and proceeded to cross the street.”

“I know I reach the corner of the street, the other side, because if I was in the street he would have hit me dead on my side, the next thing I realized I’m being hit right on the left buttocks and when I opened my eyes, I’m on the floor laid down” he said.

Thomas says he is experiencing a lot of pain in his entire back and his left shoulder.

Thomas also added that the driver paid him a visit while he was in the hospital; the driver is also said to be assisting with the police investigation.