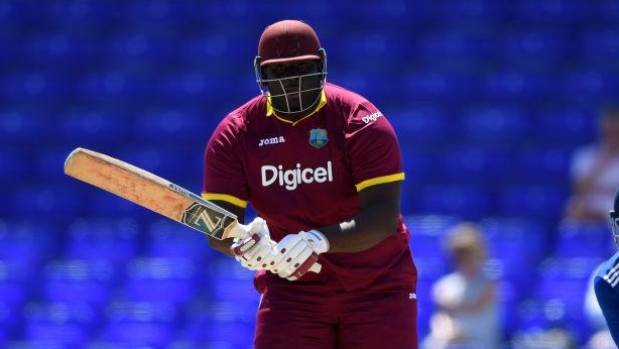 Chasing 299 for victory in their Group B match of the Regional Super50, Hurricanes were cruising at 248 for four in the 39th over, with Cornwall ripping into the Jaguars bowling en route to a brilliant 119.

With Jaguars virtually out of answers, the 19-year-old Paul stepped up, first removing Terrance Warde for 42 and then accounting for Cornwall in his next over, as the hosts lost their last six wickets for 34 runs in the space of 41 deliveries.

The victory was Jaguars’ third on the trot to remain unbeaten in the competition, following wins over English County Kent and USA Cricket.

Jaguars captain Leon Johnson had earlier agonisingly missed out on his maiden regional one-day hundred when he fell for 99 as his side piled up a challenging 298 for eight off their 50 overs.

West Indies batsman Shimron Hetmyer slammed 47, wicketkeeper Anthony Bramble chipped in with 40, while all-rounder Raymon Reifer got 36 and Sherfane Rutherford, 33 not out.

Opting to bat first, Jaguars lost Shivnarine Chanderpaul cheaply in the fourth over for six but Hetmyer and Chandrapaul Hemraj (20) added 50 for the second wicket to stabilise the innings.

The left-handed Hetmyer struck five fours and one six off 64 deliveries while Hemraj faced 32 deliveries and counted three fours.

When both perished, Jaguars were 85 for three in the 21st over and in need of a strong partnership, and Johnson promptly took control of the innings.

With scores of 0 and 50 not out in his two previous innings, Johnson produced a classy knock, hitting 10 fours and three sixes in a 94-ball stay at the crease.

He looked a safe bet for three figures when he was run out off the last ball of the 45th over. However, Bramble carried the fight, slamming four sixes and a four in a 20-ball cameo while Rutherford lashed three fours and two sixes in a 22-ball knock as Jaguars finished strongly.

Jaguars then extended that momentum as Paul struck two important early blows removing captain Kieran Powell (12) and Devon Thomas (10) to send Hurricanes limping to 61 for three in the ninth over.

The recovery was mounted through opener Montcin Hodge, who struck 48 from 50 balls with five fours and a six, as he posted 51 for the fourth wicket with Cornwall.

Once Hodge departed in the 19th over, Cornwall got stuck into the Jaguars attack, dominating the bowling for the next 20 overs in a 136-run, fifth wicket stand with Warde.

All told, Cornwall belted four fours and 10 sixes in a 94-ball innings, following up his unbeaten 132 against the USA last week.

His first half-century required 52 deliveries while his second fifty needed a mere 28 balls, as he raised three figures in the 35th over.

Warde, meanwhile, struck a pair of fours and sixes in an otherwise patient 73-ball innings but it was his demise in the 39th over, bowled by Paul, that triggered the Hurricanes collapse.

Cornwall finally perished in the 41st over and Hurricanes quickly lost their way and the game.

AUA student robbed by knifepoint while jogging on Jabberwock road