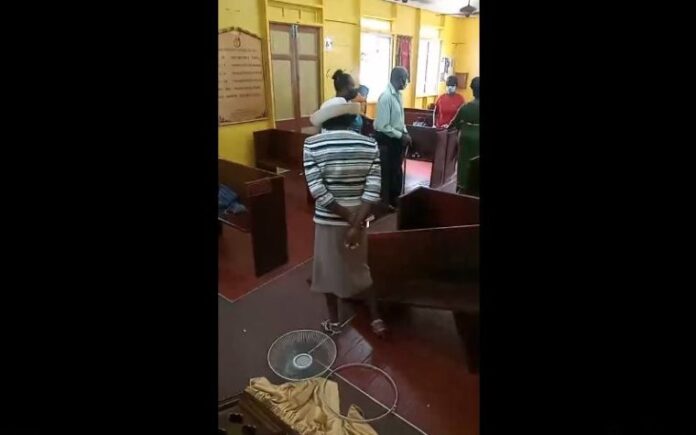 A person of interest is in custody after a brazen attack on a St. James church Sunday morning. CLICK HERE TO JOIN OUR WHATSAPP GROUP.

Shockwaves rang through Sion Hill and on social media after part of the attack was captured on camera. Delivering a sermon, assistant pastor Reverend Ambrose Headley was repeatedly interrupted by a male. Though the individual was not seen on camera, his voice was heard making several remarks as he moved closer to the platform.

Congregants attempted to quell the situation with prayer but a full-on rukus ensued. Items were thrown and knocked to the ground, including the camera streaming the service live online, as screams for help and  prayers could be heard.

After the incident was brought under control, first lady Holder returned to assure followers that the situation was being handled and alleged that the assault began after they refused to give into the suspect’s demand to “stop calling the name of Jesus”.

She said, as a result, he spat in her and the pastor’s faces and proceeded to physically assault Reverend Holder. In the video, the pastor can be seen wearing what appeared to be a bloodied shirt.“This is how he left the pastor…” the distraught Holder said.