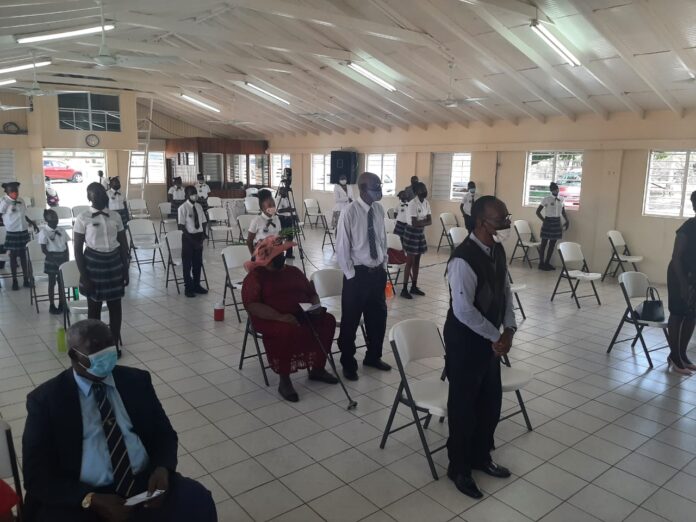 On Monday, 10th May the Staff of the Parham Primary School continued their 50th Anniversary celebrations with a Church Service at the Parham Wesleyan Holiness Church that also honoured Past Principals of the School. The Anniversary of the current site is being celebrated under the theme “50 years of Excellence: Celebrating the Past; Igniting the Future”.

The school opened its doors at the current site in the school year 1970-1971 under the leadership of Mrs. Augusta Hill.  This school year which started September 2020 and will end June 2021 marks 50 years since the school has been at the current location. The Parham Primary School has had several planned activities which included a Take-away Lunch, a Media Day, and Church Service. The Take-Away Lunch was held in October 2020.

Mrs. Augusta Hill, known as “Teacher Pepsi” who served from 1970 to 1982 at the present location. The passionate educator, the strong disciplinarian, the choir master and clothing and textile guru, the one who lived by the mantra, the heights of sudden men were not achieved by flight but they while their companions slept, were toiling upwards through the night. Received by her daughter Dr. Patricia Benn.

Dr. Howard Warner, who was another strong disciplinarian, the one who dispelled tardiness served from March to July in 1982 and in September of 1982.

Mrs. Delora Smith who served from 1982 to 2003, the energetic one, who loves cooking and treated her staff often to the sweet taste of her hand. The one who kept the culture of drama, singing and dance alive at the school.

Mr. Anthony Hampson, who served from September 2003 to 2014. Was a kind, gentle person who had a passion for music and inspired many students through his love for music. So much so that if they found that they were going to miss a pan class, they were devastated. Since that was the only class some of them wanted to attend.

All the past principals were in attendance except for Mrs. Hill who was represented by her daughter Dr. Patricia Benn. The current Principal was in attendance with a selected number of teachers and the Grade 6 Students. The other students watched the service from their classroom via Zoom.

From the feedback received, the Past Principals were appreciative of the gesture. The program also included a brief history of the School under the different leadership, songs, readings and a dance from the students of the Parham Primary School.

Grade 6 Teacher, Alexis Murray in her presentation about the History of the Parham Primary School stated that “Today, the Parham Primary School is still thriving. Under the leadership of Donald Joshua, the dedicated staff work tirelessly to ensure success. Though 50 years have passed and things have progressed. We are still faced with some of the challenges that were present in the past. Notwithstanding that teaching is a constant job which requires one to be a little bit of everything. Once you have the passion and determination then the job becomes easier. As teachers in today’s world with many distractions we pledge our unwavering commitment to do our best to bring about positive change in the school, the community and the students’ lives.”