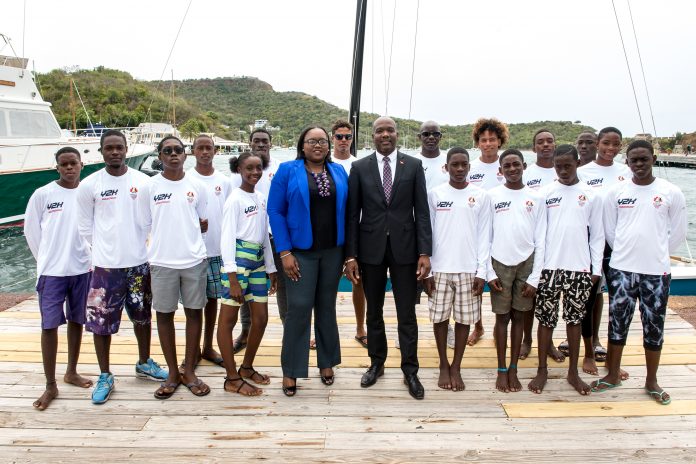 Youth sailors (13 – 25) from across Antigua and Barbuda will once again, be participating as racing crew members during the 53rd edition of Antigua Sailing Week (ASW) April 25 – May 2, 2020.

Over 40 hopefuls have signed up for the Youth to Keel (Y2K) program, which began in 2018 as a tangible and sustainable opportunity to involve under privileged youths in this sport.

“ASW has always encouraged and celebrated the participation of youth in the regatta. Yachting, as both a career and leisure opportunity, is often inaccessible to less privileged youth. Y2K provides a structured program that allows Antiguan youth with keelboat experience the chance to compete in Antigua Sailing Week,” states Alison Sly-Adams, President of ASW.

In 2019 two crews of six raced on board the NSA Cork 1720’s, with Jules Mitchell and Joshua Daniels at the helm. Jules Mitchell and his crew took first in place in their class.
Joshua Daniels (20), now a Sailing Instructor at the National Sailing Academy, has been with the Y2K since its inception: “I started sailing while attending the All Saints Secondary School. At first it was just for fun and gradually I became addicted to the sport. I have gained leadership skills that have helped me to captain one of two youth crews at last year’s Antigua Sailing Week. It has also made me more aware of my role as a role model. I encourage youngsters interested in sailing and racing to get involved”
For the 2020 Y2K program the ASW management team has invited two youth sailors, Joshua Daniels representing the NSA and Rhone Kirby from Antigua Yacht Club, to be part of the Sailing Advisory committee. This committee works with Race Manager Jaime Torres to agree the racing strategy for the event, affording this new crop of racers a chance to learn the ropes behind the scenes of race management.

Additionally, ASW sponsored Cowes Week Youth Day, in the UK, and offered the winning youth team skipper and guest a trip to ASW to race as part of the Y2K program. Ollie Hill and Emma Crane are very excited to be coming to ASW for the first time this year.

Monday, April 27 will be Y2K Race Day and all participants will be recognized at the post-race day prize giving and all will be wearing the exclusive Y2K branded race shirts.