Police are reporting that 160 pounds of cannabis was seized at Deep Water Harbour this morning around 10:30 a.m. by members of the Narcotics Department and K-9 Unit.

According to Stratcom, the officers were on duty at the Deep Water Harbour conducting a their routine check, when the dogs indicated on two blue barrels. 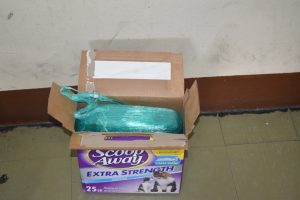 Both barrels were searched and several packages of cannabis were found inside. The packages have an estimated street value of $640,000.00 EC. The seized substance was reportedly taken to the Police Headquarters pending further investigations. No one has been charged in connection with the drugs as yet, but investigations are ongoing.