The main opposition United Progressive Party will march on Monday in a peaceful demonstration of their dissatisfaction with the Gaston Browne administration.

The march coincides the third anniversary of the Gaston Browne government which was elected on June 12, 2014.

In a statement issued moments ago, the UPP said “the power of a huge peaceful protest cannot be overestimated.” 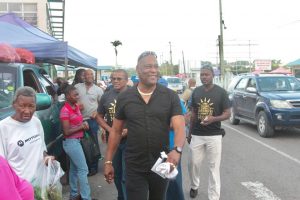 “We encourage hard working Antiguans and Barbudans to let their voices be heard and to force this government to re-think its attitude towards the people it has been elected to serve,” the statement added.

The UPP is not happy that in three years, promises to better Antigua & Barbuda have not materialized.

“They have only focused on enriching themselves and in the process, have plunged the country into scandals and blunders that have brought shame and embarrassment to this country.”

The party said it wants the support of all civic, religious, and environmental groups behind the upcoming Black Monday March.

The march starts from 5 p.m at Freedom Hall on Newgate street.