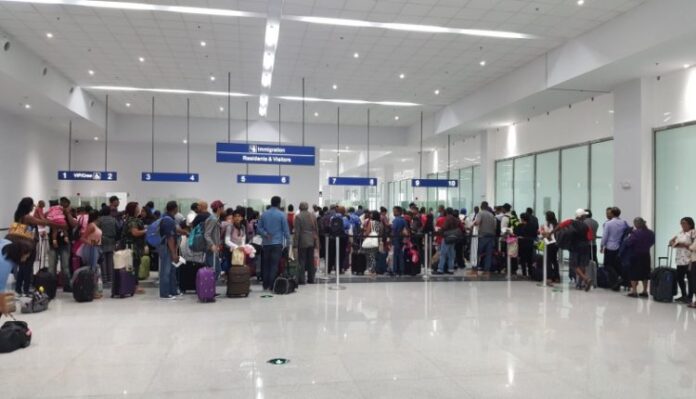 As a consequence of steady emigration, especially beginning in the 1970s, only about half of Guyanese now live within the borders of Guyana, with the remainder scattered in diaspora communities across the globe.

This is according to an analysis of the Guyanese diaspora done by the Washington based Center for Strategic and International Studies (CSIS).

The analysis found that Guyana’s emigration rate is one of the highest in the world, numbering about 30,000 annually, a sizable portion for a country with a total population that has never reached one million.

A report on the analysis published recently explains that since the 1960s, the Guyanese emigrant population has increased due to difficult economic conditions, a tense social and political environment, a weak educational system, high levels of insecurity, and an inefficient healthcare system.

Simultaneously, favourable immigration laws first in the United Kingdom, and later in Canada and the United States, and better job and education opportunities abroad have helped to motivate high levels of emigration among Guyanese.

As the number of Guyanese living abroad has increased since the 1960s, the pull factor represented by a growing number of diaspora family members has only helped to keep the emigration flow steady, the report added.

The first-generation immigrant Guyanese diaspora today is estimated to be approximately 550,000 worldwide, not including their descendants.

The Guyanese Diaspora immigrants in 2019 were: North America, accounting for 80 percent of Guyanese immigrants worldwide; the Caribbean and Latin America, with 12.4 percent, the majority of whom reside in the Caribbean; and Northern Europe and the United Kingdom, with 5.9 percent (approximately 30,000).

Recently, Foreign Secretary, Robert Persaud joined stakeholders and representatives of the Center for Strategic and International Studies (CSIS) in a virtual roundtable discussion commemorating the launch of an in-depth study ‘The Guyanese Diaspora.’

According to the Foreign Secretary, the report provides a comprehensive analysis of the Guyanese Diaspora and highlights some of the perennial challenges of brain drain and high emigration rates.

Already, the Ministry of Foreign Affairs and International Cooperation has fortified its engagement with the Guyanese community overseas through the reintegration of the Diaspora Office. The Office has begun to engage international partners, such as the International Organization of Migration (IOM), to develop projects and initiatives aimed at furthering Diaspora engagement.