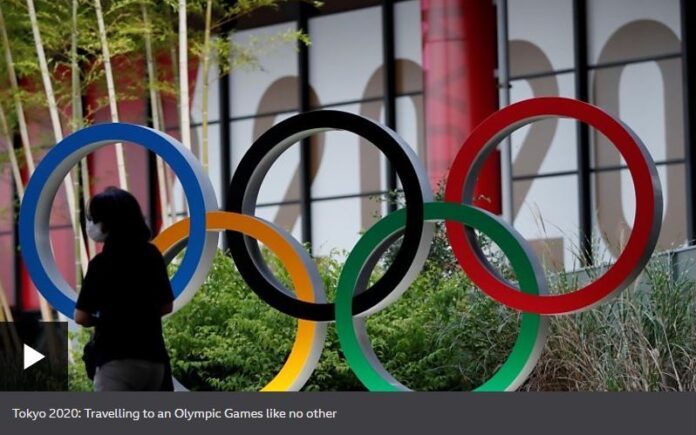 BBC: The show director of the Olympics opening ceremony has been dismissed, one day before the event is due to be held.

Footage of Kentaro Kobayashi from the 1990s recently emerged in which he appears to be making jokes about the Holocaust.

The dismissal is the latest in a string of scandals to hit the Games.

Tokyo 2020 – postponed last year because of the Covid-19 pandemic that has constantly threatened to derail the event – has seen three men forced to step down since the start of 2021.

Earlier this week, a composer quit the team creating the ceremony after it emerged he had bullied classmates with disabilities at school

In March, Olympics’ creative chief Hiroshi Sasaki quit after suggesting that plus-size comedian Naomi Watanabe could appear as an “Olympig”. He later apologised

And in February, Yoshiro Mori was forced to step down as the head of the organising committee after he made remarks about women that were criticised as “inappropriate”. Mr Mori was quoted as saying women talked too much and that meetings with many female board directors would “take a lot of time” 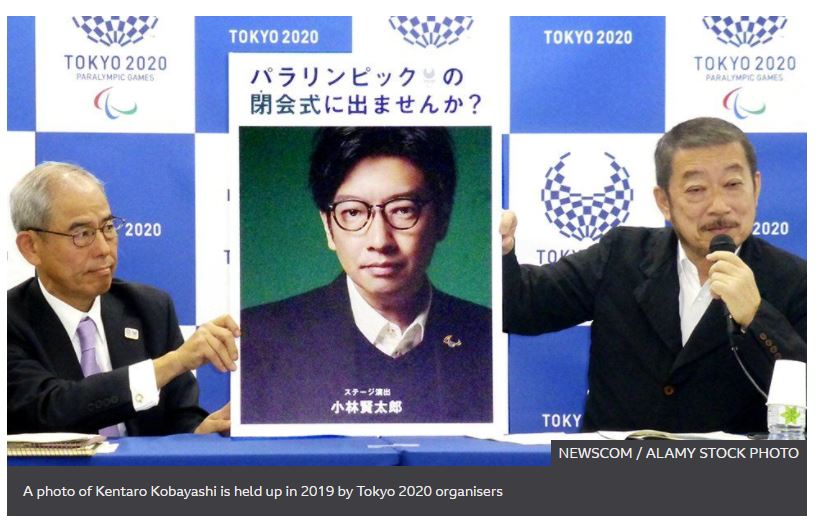 This latest scandal has seen former comedian Mr Kobayashi strongly criticised for a sketch he performed 23 years ago, in which he and another comedian pretend to be children’s entertainers.

In the sketch Mr Kobayashi turns to his colleague, referring to some paper dolls, saying they are “the ones from that time you said ‘let’s play the Holocaust’”, according to AFP news agency.

Japanese Prime Minister Yoshihide Suga described the comments as “outrageous and unacceptable”, while Rabbi Abraham Cooper, of the US-based Holocaust research body Simon Wiesenthal Center, said: “Any person, no matter how creative, does not have the right to mock the victims of the Nazi genocide.”

Mr Kobayashi also issued a statement responding to his dismissal.

“Entertainment should not make people feel uncomfortable. I understand that my stupid choice of words at that time was wrong, and I regret it,” it said.

Friday’s ceremony, which Mr Suga said should proceed as planned, will officially kick off two weeks of competition.

However, after the removal of Mr Kobayashi, organisers are now reassessing how to hold Friday’s event – which will only be watched by about 950 people in the stadium, in order to minimise risks.

“With the opening ceremony being so imminent, we apologise for causing concern to those involved in the Olympics, to the citizens of Tokyo and the Japanese public,” Ms Hashimoto said in a statement.

The scandals have done little to stop massive unease about the Games, which were postponed from last year due to the pandemic. The head of the Tokyo 2020 Olympic Committee admitted this week that he has not ruled out cancellation, even at this late stage.

A recent poll found some 55% of people in Japan were opposed to holding the Games, amid fears it could become a coronavirus super-spreader event, Reuters news agency reported.

Already, organisers are dealing with rising Covid case numbers among athletes and officials. On Thursday, they said 91 people accredited for the Games have now tested positive for the virus.

An increase in cases among Japan’s population – only of a third of whom have been vaccinated – has also led to a state of emergency being declared for the duration of the Games.

However, World Health Organization chief Tedros Adhanom Ghebreyesus congratulated organisers on Wednesday for having so far “done your best”, telling them a “zero risk” Games was not possible.

The first events of Tokyo 2020 have already begun, with the hosts Japan winning their softball match on Wednesday.