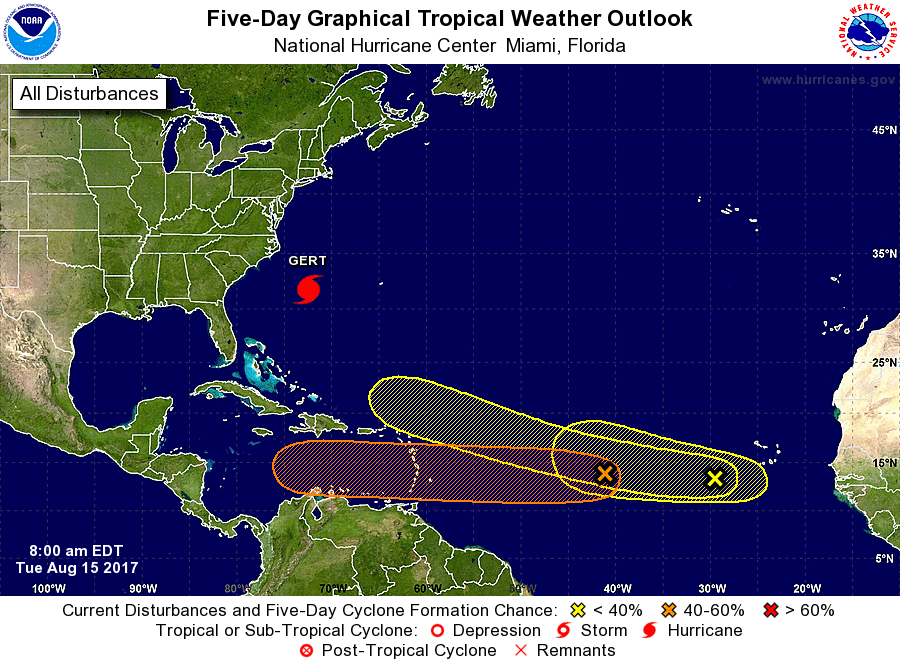 Weather officials are keeping a watchful eye on three systems in the Atlantic.

An elongated area of low pressure, located more than a thousand miles east of the Lesser Antilles, is producing disorganized showers and thunderstorms.

This system is expected to move westward at 15 to 20 mph across the tropical Atlantic Ocean, crossing into the Caribbean Sea on Friday.

According to the National Hurricane Centre environmental conditions appear somewhat supportive of tropical cyclone formation over the next few days but should become less favorable once the system moves into the Caribbean Sea. It has a medium chance (40%) of becoming a tropical cyclone during the next five days.

A second area of low pressure, associated with a tropical wave, is also producing disorganized shower and thunderstorm activity a few hundred miles west-southwest of the Cabo Verde Islands. Environmental conditions could be conducive for some slow development of this system over the next few days while it moves westward to west-northwestward at 15 to 20 mph. It has a low chance (20%) of becoming a tropical cyclone during the next five days.

Another tropical wave over western Africa is forecast to emerge over the far eastern Atlantic Ocean on Wednesday. Conditions appear conducive for some development after that time while the wave moves westward to west-northwestward at about 15 mph. It also has a low chance (20%) of becoming a tropical cyclone during the next five days.