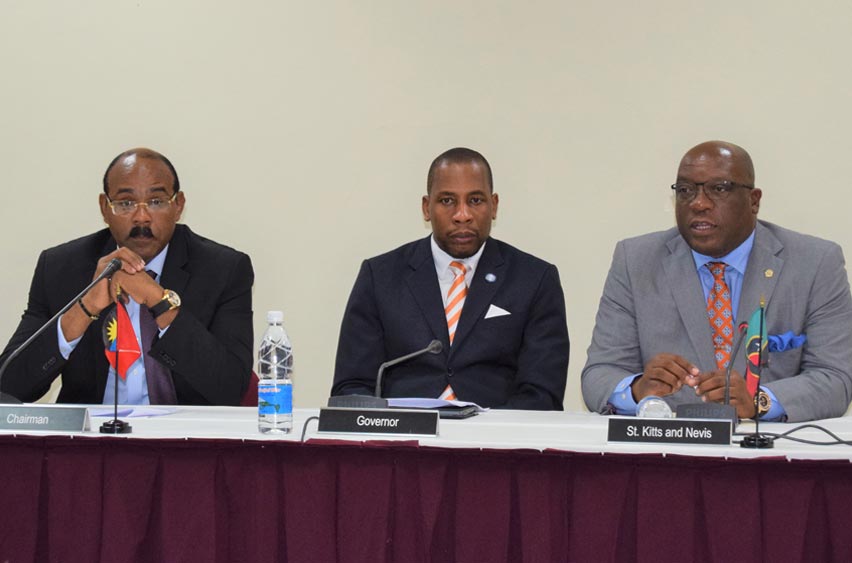 The financial sector in the Organisation of Eastern Caribbean States (OECS) remained “broadly stable” last year and economic growth in the nine-member sub-regional grouping is projected at 3.1 per cent this year and 3.6 per cent in 2020.

Grenada’s Prime Minister Dr. Keith Mitchell, who chaired the one-day meeting of the Monetary Council of the Eastern Caribbean central Bank (ECCB) here on Friday, said that the meeting had discussed the preliminary Financial Stability Report and that “developments in the ECCU banking sector through 2018 were largely positive”.

He said that the insurance sector was assessed as being “broadly stable and solvent with an increase in premiums” and that profitability was reported to have improved following the tumultuous events of 2017, when Hurricanes Maria and Irma battered several Caribbean countries including Dominica, St. Kitts-Nevis, the British Virgin islands and Antigua and Barbuda.

“Several factors contributed to that outturn, including improvements in the tourism and construction sectors,” Mitchell said, adding that several initiatives which would enhance financial stability in the sub-region were being pursued.

“These initiatives included implementation of a risk based supervisory approach for the commercial banking sector; regulation of the Caribbean Credit Card Corporation (4Cs); and the establishment of a credit bureau in the ECCU.”

Grenada is one of four OECS member states that have enacted the Harmonised Credit Reporting Bill which would pave the way for the creation of the credit bureau.

The communique issued at the end of the meeting noted that the purpose of the bureau is to “provide credit-granting institutions with better means to access information and to facilitate the extension of credit to underserved segments of the population”.

Mitchell said that the Council also noted the proposed framework for identifying systemically important commercial banks and credit unions in the ECCU, adding that 12 institutions were identified, of which three were banks and nine were credit unions.

“While commercial banks continued to dominate the financial sector, credit unions were expanding, becoming an increasingly important source of credit to the private sector through increases in membership, assets, loans and deposits. The boom in credit union activity has implications for financial inclusion and the financial stability framework,” he added.

The communique noted that domestic credit in the banking sector declined by an estimated 5.3 per cent to US$8.6 billion continuing the pattern observed since 2012 and was largely influenced by lower credit to the private sector but mitigated by a decrease in net credit to government.

But the statement noted that credit extended by the credit union sector increased and that ‘supported by stronger economic activity, money and credit conditions in the ECCU are expected to improve in 2019.

It said that net foreign assets stood at US$4.6 billion at the end of November 2018, an increase of 2.6 per cent over November 2017 and that the Eastern Caribbean currency “remains strong with the backing ratio as at 31 December 2018 being 98.6 per cent”.

The communique noted that the Council was informed that several key reforms and investments were needed to expedite and raise the current growth trajectory to the five per cent growth target required to support socio-economic transformation.

“ In this regard, Council recommended that countries implement the actionable items of the Annual Growth and Resilience Dialogue.  These include: enactment of fiscal resilience frameworks; improving the business environment; improving regional transport infrastructure; increasing access to credit; enhancing skills training and apprenticeship programmes and harmonising building codes.”

The Monetary Council is the highest decision making authority of the Eastern Caribbean Central B ank (ECCB) and comprises the finance ministers from Antigua and Barbuda, Dominica, Grenada, St. Lucia, St. Vincent and the Grenadines, St. Kitts-Nevis, Montserrat, Anguilla and the British Virgin Islands.