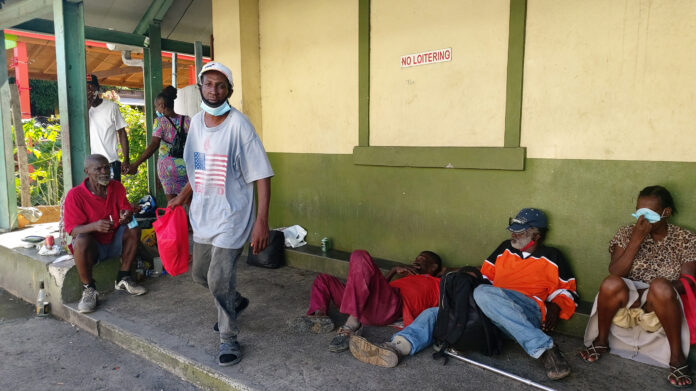 There are several young men new to the streets, lost, or abandoned, maybe both. Doesn’t anyone in the Happiness Ministry or the Social Services Ministry see them or want to help them.

It really does not matter whether you want to or not you are bound by your Ministry’s portfolio to reach out and help them.

One by one the new ones are moving slowly into madness, clearly sleeping in abandoned places, they roam the streets, corners of their mouths white, and unwashed; does anyone in the Government see them.

The young people want more out of life and are dropping out again, they do not see the point of living on the edge of life for all of their life and reaching nowhere, not even guaranteed to receiving any benefits from the years of grunt work.

When they are forced to witness other young people growing in their country while they are not, disillusionment sets in and they withdraw from society, some in a slow fall while staying on the job, if they have one, going nowhere; and others, drop out into the streets becoming homeless.

With ‘weed’ so easily available to anyone with a few dollars, many young people who have no base, unlike the Rastafari community, smoke on an empty stomach, fall asleep and have hallucinations instead of peaceful reasoning and good dreams. These negative states of being soon lead to an unsound mind, as exhibited by many of these youth roaming the streets, as we watch them deteriorate.

During the open fora prior to the enactment of the Cannabis legislation, concern for this very state was tabled, alerting the forum to the need for rehabilitation centers, where this fallout from mis-use of cannabis could be professionally attended.

It was even raised in the form of a fee from each licensee to cover this casualty of the Cannabis trade.

In their haste to effect the Cannabis legislation in order to hold meetings with the overseas Cannabis groups of investors, the Government who for the most part are old and unfamiliar with ‘weed,’ left the door wide open for the enslavement systems of the past to come to the fore.

Instead of using the systems set in place in the last days of colonial control, where the old leaders established Peasant Development (PDO) which bought product from the farmers who were given plots of land to farm independently.

The Government of today has even more agencies to make the development of a Cannabis trade even more efficient. CMC could be the agency which grades the Cannabis, thereby allowing independent Antiguan farmers who chose to excel by offering the high grade product to get paid accordingly. Instead, unlike past development of the farmers, today’s owners, some of them absentee, have our people on their farms, labourers by the sweat  of their brow, planting ‘Weed’ for a new Massa.

The Ministry of Health, which has been the big sponsor of ‘Medical Cannabis,’ needs to huddle with Social Services and the Ministry of Happiness and resolve this matter of struggling youth yesterday. This is no time to revert to the days when our young men lived on High Street begging for their next crack fix, asking people to kick them and pay them! Get Corporative Cannabis Farms for Youth and allow the young men to industrialize themselves, by monetizing what is now their habit.