Contractors working on the new headquarters for the National Office of Disaster Services (NODS) do not anticipate any major setbacks with the project.

The work began last week and is expected to last for six months. It is being funded by the US Southern Command – a military and civilian organization, and carried out by Anthony Kwan Engineering Association (AKEA) of Florida. 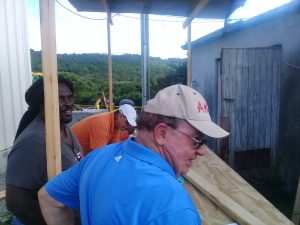 McGuire says AKEA was hired to design and build the structure which would include additional offices and conference rooms among other facilities. “The building is engineered to the international building code applicable to this area for seismic and hurricane activity. So it’s rated to withstand all anticipated hurricanes as well as all anticipated seismic activity with reference to historical data”, said McGuire.

According to Rivera, 70 percent of the materials will be brought in from the US. He is expecting that the work will be kept on track for the duration of the project.

McGuire notes that the level of co-operation received from the director and staff at NODS makes it easier for the project to move along faster.

The cost of the new NODS headquarters is 2.2 million US dollars.