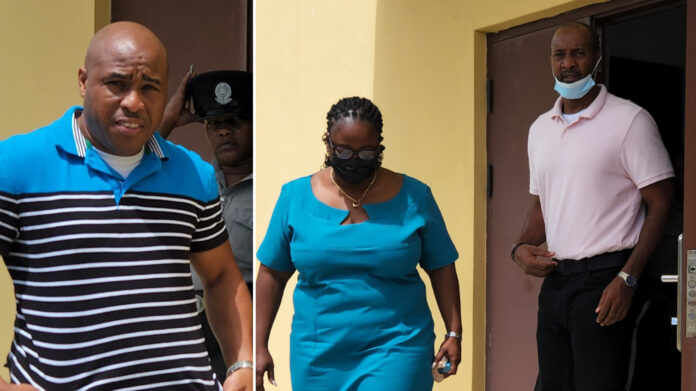 The three persons charged charged with fraud related to the Antigua and Barbuda Customs Department reportedly were not required to deposit any cash to secure bail from the High Court, and sources close to the matter are crying foul.

Customs Officer Joezine Christian and brokers Rowan Matthew and Foston George are alleged to have siphoned thousands of dollars from the Department almost five years ago, and they were arrested and charged last Friday, July 29.

To secure their release from custody, attorney-at-law Wendel Robinson made a bail application before High Court Judge Colin Williams. According to a document obtained by REAL News, the application was submitted via email, reportedly because of its urgency and because it was over the Carnival holidays.

In the court papers dated August 1 – which was a public holiday –Commissioner of Police Atlee Rodney and Director of Public Prosecutions (DPP) Anthony Armstrong were named as the respondents and were represented by Daniel Lattery, a Crown Counsel in the Office of the DPP.

The accused were subsequently granted bail in the sum of $10,000, each, with two sureties. No cash deposit was required.

The High Court Judge also ordered the trio to attend the St. John’s Magistrates Court on Wednesday, August 3 –d which they did and were given October 5 as the committal date.

Other conditions of the bail included the surrender of travel documents and the requirement that any travel outside this country must have the express approval of a High Court judge.

The accused must remain in residence at their current addresses and may move only with written consent of the court. All three are required to report to the nearest police station once a week, and they are not allowed communication with any witnesses involved in the case.

The judge also ordered that if the accused are arrested for any indictable offence while on bail, or if they fail to observe any of the bail conditions set, they will be taken back before the Court for consideration of a forfeiture of their recognizance and/or a revocation of their bail.

Meanwhile, a legal source says he finds it very odd that the Magistrates Court – the court of first instance – was bypassed and the bail application was taken directly to the High Court.

Just as strange, he says, is that for an offence of this magnitude – where persons are alleged to have stolen from the public purse –the accused were released on bail without a cash deposit.

He notes that others have been taken before the court on lesser charges, including drug offences, and have had to pay large cash deposits.

The source refers specifically to a matter involving well-known personality Washington Bramble, who was granted bail on Thursday, August 4, for offences under the Electronic Crimes Act.

While Bramble’s alleged offence is a serious matter, the source continues, it has not deprived anyone of anything. But in the case of the Customs Department, the Government reportedly has been deprived of revenue, he says.

According to the source, the justice system in Antigua and Barbuda is skewed, and persons who “are connected can get away with murder.”

To illustrate his point, he refers to the case involving former Executive Secretary of the Board of Education D. Gisele Isaac and Algernon “Serpent” Watts, who both paid significant cash deposits as conditions of their bail.