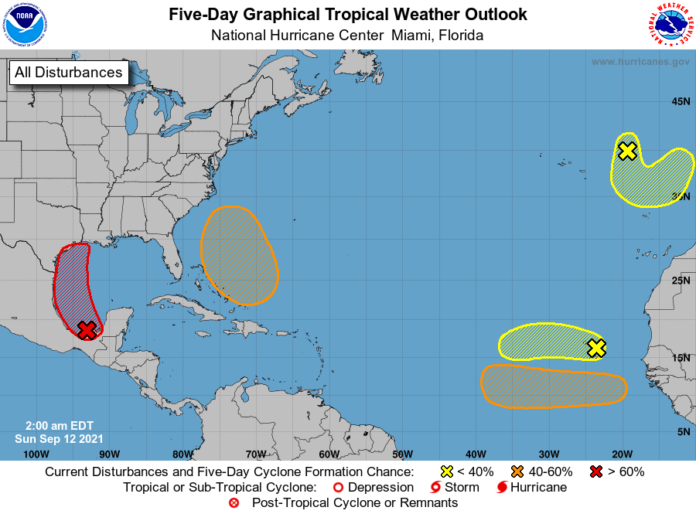 It is an active week for the Atlantic basin with 5 systems that NHC are monitoring, with 3 of them could becoming tropical depressions by midweek.

For the North Atlantic…Caribbean Sea and the Gulf of Mexico:

pressure over the southwestern Bay of Campeche have increased

overnight and are showing signs of organization. Environmental

conditions are conducive for additional development, and a tropical

depression is expected to form later today or tonight while the

system moves northwestward and then northward near the coast of

northeastern Mexico.  Additional development is possible through the

middle of next week if the system remains over water, and  interests

along the western and northwestern Gulf coast should monitor the

progress of this disturbance as watches may be required for portions

this afternoon. An Air Force Hurricane Hunter aircraft is currently

en route to investigate the system this morning.

Regardless of development, the disturbance will continue to produce

heavy rain across portions of southern Mexico today, which may lead

to flash flooding and mudslides.  By late today, heavy rain is

expected to reach portions of the Texas and Louisiana coasts, with

a heavy rain threat continuing across those coastal areas through

the middle of the week. Localized significant rainfall amounts are

possible, potentially resulting in areas of flash, urban, and

association with a tropical wave located near the Cabo Verde

development, and the chances of tropical depression formation are

decreasing while the system moves westward over the far eastern

tropical Atlantic.  By the middle of the week, stronger upper-level

winds and marginally warm ocean temperatures are expected to limit

northeastern Atlantic a few hundred miles east-northeast of the

Azores. This system is forecast to move south-southeastward towards

warmer waters, which could allow the low to gradually acquire some

tropical or subtropical characteristics during the next couple of

days.  After that time, the system is forecast to move inland over

Africa in a couple of days. Gradual development of this system is

possible thereafter, and a tropical depression could form by the

middle of the week while it moves westward across the eastern

southeastern or central Bahamas in a few days resulting from a

development of this system is possible, and a tropical depression

could form later this week several hundred miles southeast of the

Carolinas while it moves northwestward across the western Atlantic.