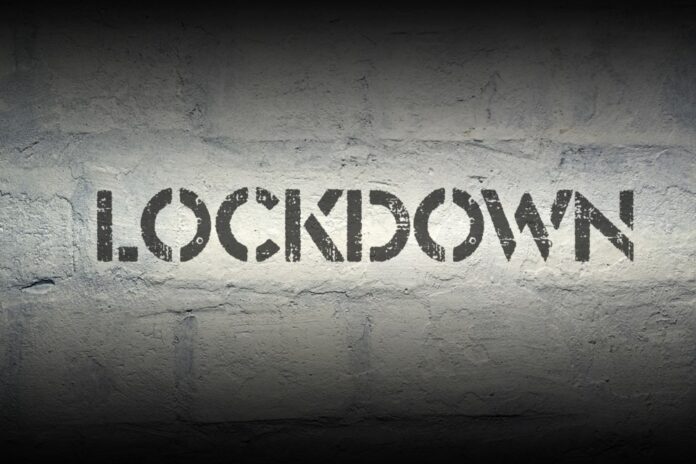 Italy is set to begin its new lockdown on Monday as hospitals struggle with a spike in Covid-19 patients.

Across the border in France, special medical planes dispatched patients from overrun Paris intensive care units to less saturated regions over the weekend.

Officials say the Paris region may join much of Italy in imposing a new lockdown as new variants of Covid-19 fill up hospitals and limited vaccine supplies drag down inoculation efforts.

‘If we have to lock down, we will do it,’ the head of the national health agency, Jerome Salomon, said on BFM television Sunday. ‘The situation is complex, tense and is worsening in the Paris region.’

Meanwhile, many Italians – including those living in Rome’s region Lazio – will be put under tougher restrictions from Monday.

It comes almost exactly a year after Italy became the world’s first country to enact a nationwide lockdown to stem the spread of the virus.

A majority of European countries are now seeing Covid cases start to rise as new and more-infectious variant of the disease begin to spread.

With the continent’s vaccine drive in disarray and just seven per cent its population given at least one dose, leaders are being forced to turn once again to lockdowns to bring the virus under control.

The number of Covid-19 cases have skyrocketed in France and Italy – with 23,326 and 26,062 cases respectively being reported on Saturday.

In contrast, in the UK, where the country is locked down and vaccine rollout has reached more than 23million people, 5,534 people have tested positive for the disease.

As a result of the increasing number of cases, both France and Italy’s hospitals are struggling with an increase of ICU admissions for Covid-19.

Mr Salomon says France has more people in intensive care for COVID-19 and other ailments – about 6,300 – than the overall number of ICU beds it had going into the pandemic. In contrast, in the UK, hospitalisations have decreased.

The health official acknowledged that a nationwide 6 p.m. curfew ‘wasn’t enough’ in some regions to prevent a spike in cases, notably of the variant first identified in Britain.

The new Italian government says it aims to have 80 per cent of the population vaccinated against Covid-19 by the end of September.

Premier Mario Draghi’s office on Saturday announced more goals of the national vaccination program, which only recently has started picking up its pace after delays in vaccine deliveries and other logistics slowdowns.

Just under two million people in Italy – or roughly 3 per cent of the population – had been fully vaccinated as of Saturday.

In contrast, yesterday the number of Britons who have received at least one vaccine dose rose to 23.684 million from 23.315 million the day before.

Italy began its coronavirus vaccination campaign in late December but as elsewhere in Europe, it has been dogged by delays in deliveries of the jabs.

Concerns over reported side effects of the AstraZeneca/Oxford vaccine prompted the health regulator on Thursday to suspend a batch of the jabs, even while it warned there was no evidence of a link with blood clots.

It comes just days after Italy blocked a batch of the vaccines from going to Australia, saying they were needed to help speed up its own drive.

Italy’s daily new caseloads of confirmed infections have soared above 20,000 in recent days, including on Saturday, with the Health Ministry reporting 26,062 cases.

German officials have resorted to threatening those who refuse the vaccine in order to increase uptake, while health authorities in France have also waged a PR offensive – insisting the vaccine is safe and effective.

Meanwhile UK Prime Minister Boris Johnson has pledged that every UK adult will have been offered a vaccine by June 31, meaning all lockdown measures will be lifted on June 21 – provided infections don’t soar again.

The French government has been relying on curfews for months – along with the long-term closures of restaurants and some other businesses – to try to avoid a costly new lockdown.

But localized outbreaks are raising questions about the government’s virus-fighting strategy.