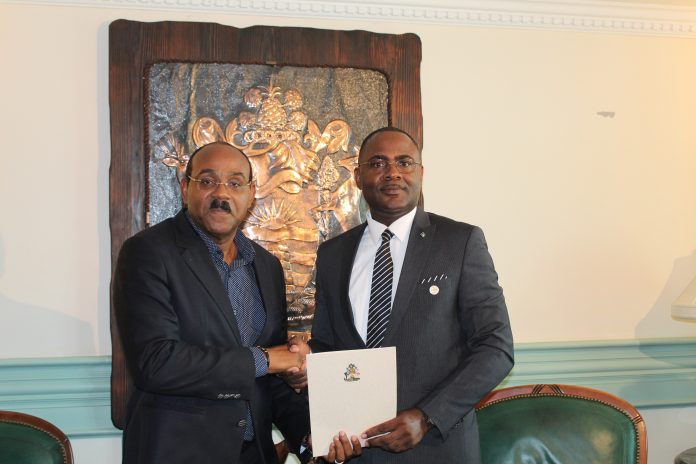 Prime Minister Gaston Browne today, welcomed His Excellency Reuben Rahming, High Commissioner-designate of the Commonwealth of the Bahamas to Antigua and Barbuda.

Antigua and Barbuda has enjoyed good bilateral relations with The Bahamas dating back to former Prime Minister Sir Lester Bird and Bahamian Former Prime Minister Perry Gladstone Christie. Both Countries still enjoy good relations with each other and also within the framework of CARICOM. PM Browne highlighted that even during CARICOM meetings, both countries would always sit side by side.

Prime Minister Browne used the opportunity to speak on the importance of the tourism sector for both countries especially in the cruise industry and the similarities in the Tourism product that they share.  The Prime Minister also inquired as to the developments of Global Ports Holding within the Bahamas, as the company was also contracted to redevelop Prince George Wharf, the main cruise port in Nassau. Browne made mentioned that Antigua and Barbuda have also entered into an arrangement for the Cruise Port Management with Global Ports.

Baker’s Bay was another ongoing development in the Bahamas that PM Browne highlighted to the High Commissioner as the developers are the same people involved in one of the major tourism development projects in Barbuda. Browne spoke of the high-end development the company will bring to the people and island of Barbuda.  Browne was told that the development did raise some questions of environmental issues which were overcome in the Bahamas. PM Browned noted that it is “his government’s primary objective to improve the port facilities and tourism product for Antigua and Barbuda.”

Further collaboration for mutual interest was also explored during the meeting with High Commissioner Rahming. Both PM Browne and Rahming spoke of areas of greater cooperation in airlift between Bahamas Air and LIAT. The Prime Minister indicated that Tourism Minister, The Hon. Charles Fernandez is engaged in ongoing talks with Bahamas Air.

PM Browne concluded by signifying that both the Bahamas and Antigua and Barbuda rank highly in terms of GDP per capita amongst CARICOM Member States, therefore both nations should work closely to achieve their respective developmental agendas.

In response, High Commissioner Reuben Rahming brought warm greetings on behalf of Bahamas Prime Minister Hubert Minnis. The High Commissioner praised PM Browne for his leadership nationally and within CARICOM. “I must admit, I am a bit of a fan of yours,” His Excellency stated.

The High Commissioner thanked PM Browne for utilizing Bahamian company (Bahamas Hot Mix) for the reconstruction of roadwork in Antigua and Barbuda. He further spoke to the importance of investment in infrastructure and long-term benefit for the society and the country’s development.

In closing, High Commissioner Rahming spoke about deepening relations through culture, economics, and trade as he presented his credentials to Prime Minister Gaston Browne.