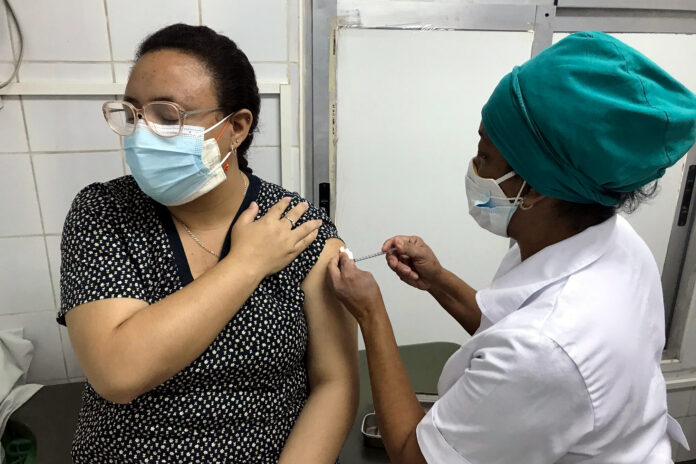 TELUSUR: If the total population of the Caribbean nation is taken into account, 52.3% of its inhabitants (5,847,755) have already received the complete anti-COVID-19 vaccination schedule, according to Minsap.

That scheme includes people with third doses and patients convalescing from COVID-19 to whom the Soberana Plus vaccine was applied, initially designed for those who overcame the disease and used as a booster.

According to the latest report published by the health entity, as of October 6, a total of 9,571,923 people received at least the first dose of one of its own vaccines, which represents 85.6% of the entire population of the country (11,180,000 approximately).

This figure also represents 97.8% of all vaccinable people, i.e., those without any health problem and with all the possibilities to receive the Cuban products Soberana 02, Soberana Plus or Abdala.

The percentage exceeds the world average, since only 46.3% of the planet’s inhabitants have the initial injection, according to data from the Our World in Data information platform.

The Caribbean nation leads the list of Latin American countries with the highest percentage of people in this situation.

At the close of October 6, Minsap said, 22 million 116 160 doses of these products had been applied in Cuba.

In the archipelago, a vaccination schedule was approved months ago, with the aim of reaching 92.6% of its population fully immunized by the end of November.

The nation is the first in the world with a massive anti-COVID-19 immunization campaign for pediatric ages between two and 18 years old, which began last September 3 and up to October 3, 1,731,591 children and adolescents had already received the first dose of Soberana 02 plus Soberana Plus (0-28-56 days).

In addition, the Soberana Plus-Pediatrics clinical trial, which will include some 530 infants of the provinces of Havana and Cienfuegos of the same age group and convalescents of COVID-19, will be vaccinated.