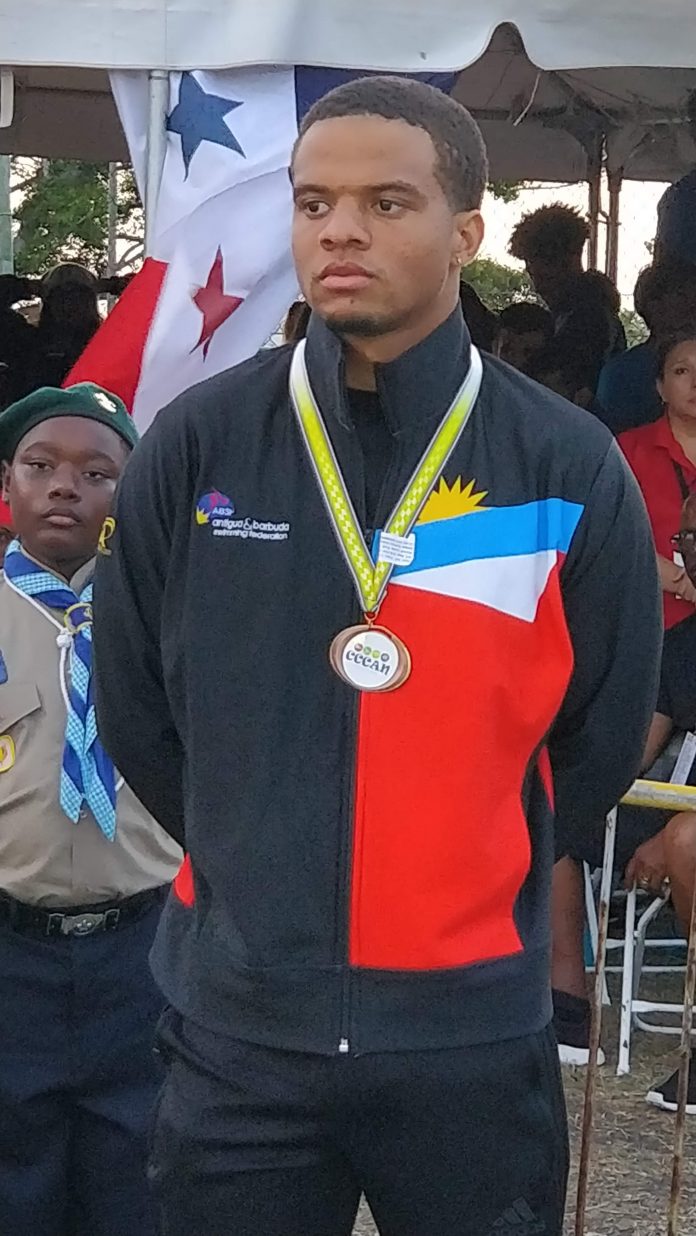 Antigua and Barbuda’s national swimmers have continued to showcase their talent in overseas meets, and at the same time, they have collected prestigious awards while achieving numerous age group and national records.

Most recently, Diallo Marshall, swimming for the Hartwick College Hawks in Division Three of the National Collegiate Athletic Association (NCAA), was named Empire 8 (E8) Male Rookie of the Meet, upon the conclusion of the fourth and final day of the inaugural Allegheny Empire Championships. The award was based on his conference titles in the 50 and 100 short course yards events. His strong performances contributed to Hartwick men’s swimming and diving team finishing second overall in both the combined and Empire 8 standings ahead of third-place Penn State Behrend.

Of note, Marshall’s preliminary time of 46.08 seconds in the 100-yard event ranks third in program history and garnered him a AAAA (quadruple-A) time along with the Allegheny Mountain Colligiate Conference record (AMCC). Diallo’s impressive 50-yard time of 20.84 was also a AAAA time and resulted in a new National Age Group Record (NAGR) for 50 yards (short course). Earlier this year, Marshall was named the Empire 8 Conference Male Athlete of the Week for all competitions taking place between December 31, 2019 and January 5, 2020.

Meanwhile, Noah Mascoll-Gomes, who swims for the Mount Allision University Mounties in New Brunswick, Canada, was named Atlantic University Sport (AUS) Swimmer of the Year 2019-2020 at a gala luncheon hosted by Dalhousie University. Noah earned a total of six first-place wins and five second-place individual finishes throughout the 2019-2020 season, in the four AUS invitational swim meets in which he competed. He posted U SPORTS qualifying times in both the 100m and 200m men’s freestyle and was also honoured as the AUS Rookie of the Year 2018-19 and Rookie of the Meet 2019-2020; at the 2020 Subway AUS Swimming Championships. Noah has previously represented Antigua and Barbuda at the 2016 Summer Olympics held in Rio de Janeiro in the men’s 200-meter freestyle event and was the flag bearer in the closing ceremonies. 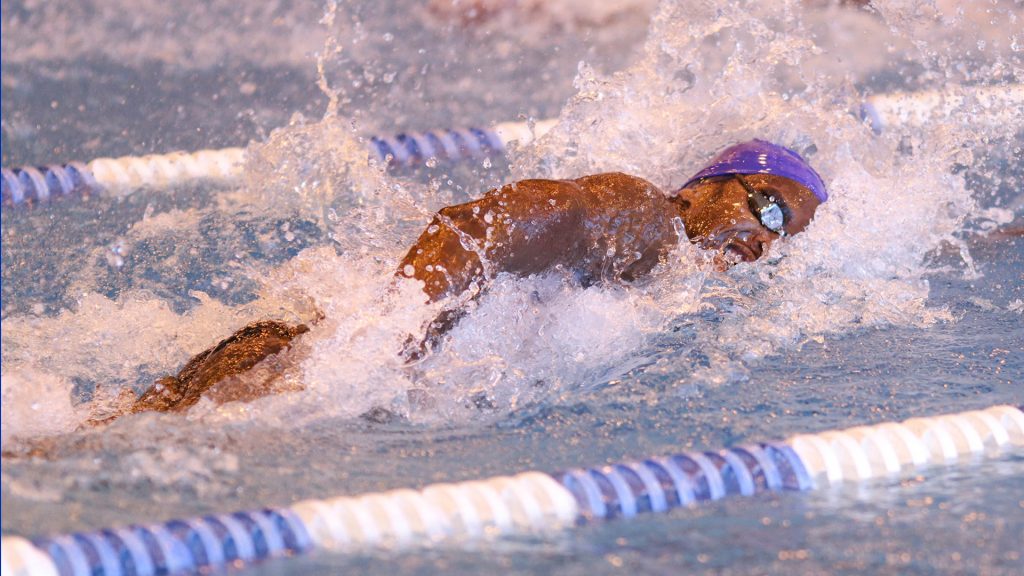 President of the ABSF, Dr. Derek Marshall, congratulated the swimmers on their outstanding achievements, saying, “2020 is off to a great start for our overseas swimmers. Both Diallo and Noah are to be commended for their achievements. They are shining examples of what can be achieved with hard work, focus and dedication.” He added, “We have other great swimmers at universities overseas and they are doing fantastic things in the pool. As the world prepares for the summer Olympics, it is great to see that swimming continues to rise and is on the right track to, one day, bring home Antigua and Barbuda’s first Olympic medal.”

President Marshall also made references to the other outstanding swimmers including Samantha Roberts and Jadon Wuilliez who both capped-off 2019 with inspiring performances. 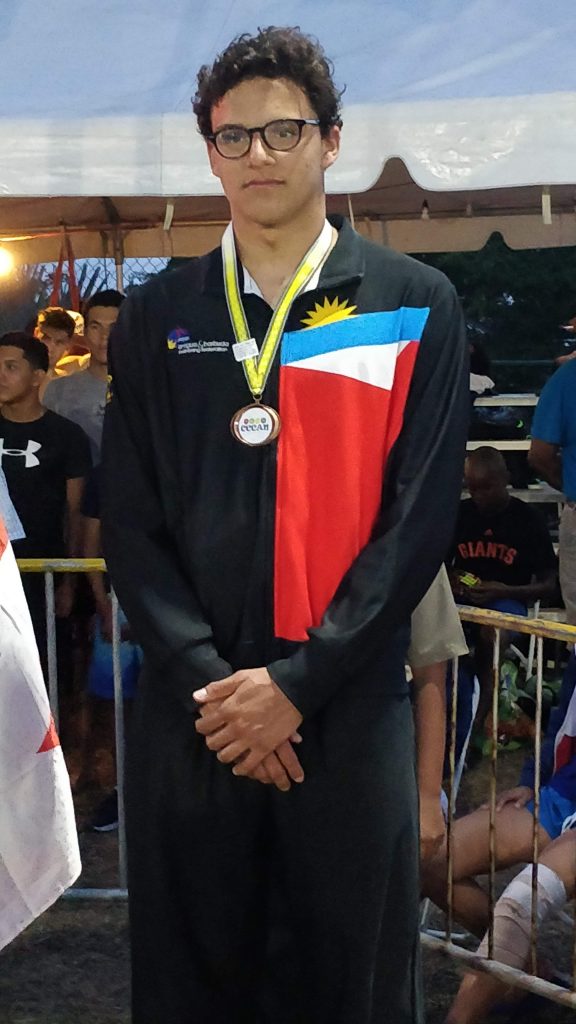 Samantha Roberts, swimming in Canada for the Western University Mustangs, produced 3 age group and national records at the 2019 OUA Fairweather Division Championships, held at the University of Toronto Varsity Pool, November 22nd – 23rd. Roberts delivered her short course records in the 50 meter freestyle in a time of 26.73, 58.38 for the 100 meter freestyle and 1:05.63 in the 100 meter butterfly. Her 50 meter freestyle record eclipsed her previous record of 26.82, set just one week earlier at the Western University Intersquads Time Trials held November 15th – 17th, where she also produced a record in the 50 meter butterfly with a time of 28.47. 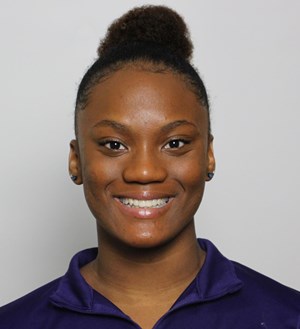 Although ill during the Plymouth Leander Winter National Qualifier, Jadon produced outstanding results and proves why he is the number-one ranked 17-year-old in the United Kingdom for the 50 meter breaststroke in short course meters.

Darren Derrick, ABSF Vice-President of Pools, added his congratulations to the overseas swimmers saying, “It is exciting to see our swimmers branching out and proving their potential on the big stage. It is worth noting that all of these swimmers learned to swim in Antigua and have come up through the local club system. They are doing fantastic things and making Antigua and Barbuda proud every time they touch the water. I encourage everyone to support the swimmers as they represent our nation at every event in which they participate.”