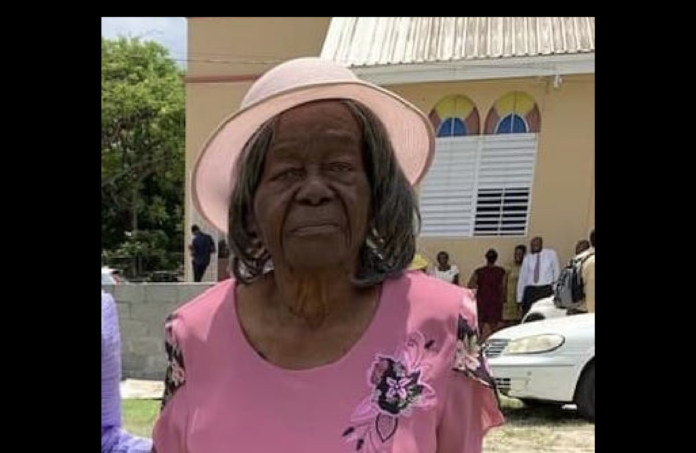 Jane Lucreta Ryan today becomes the latest person in Antigua and Barbuda to reach the grand old age of 100.

Sarah Jane as she was affectionately called, was born on December, 21st 1922 and was the eldest of four (4) siblings. Her father, Luke Julius of St. Kitts and her mother, Priscila Fergus of Monserrat met in the Dominica Republic.

After the passing of her mother, she relocated to Dominica and resided with three (3) of her aunts. Sarah Jane became an Adventist after a series of meetings held by Pastor Gooding, she gladly accepted the call and was baptized as a teenager.

She was encouraged by many in Dominica to further her education at what was called “Caribbean Collage”, however, there wasn’t any permanent help from her family to pursue her studies.

After the passing of the aunt she resided with, she was taken in by another aunt, Ann Fergus who lived in Monserrat. There she stayed and often times she’s also with her grandfather. After moving to Monserrat, her aunt in America had hopes of adopting her and the thought of this had brought a huge level of financial relief but her main focus was on the Lord and to remain active in Church.

It was at the early age of seventeen (17) she met and fell in love with James Ryan in Monserrat and at the age of 18 they were happily married. She made frequent visits to Antigua to be with her husband who was employed in Antigua at the time. Their first child was born in Monserrat, following this she made the decision to permanently settle in Antigua and Barbuda where she lived on Church Street and became an active member of the St. John’s Adventist Church along with her husband. They had four (4) children- two (2) boys and two (2) girls. One of boy child died soon after birth and the other died on March 7th 2017. Her husband died on May 21st 2003.

Sister Ryan, Sister Sarah, Mother Ryan are all names that speak loudly of the type of person we are speaking about.

When her membership move to the Villa Church she worked even harder and continued to work with children and the Dorcas Society. She was an outstanding cook, baker, seamstress, house keeper and business woman. In the villa community she was known as the Ginger beer Maker, Ice Cream seller, the Frozen Joy Lady and all of these were self-taught.

She was a strong believer in Christian Education and with that she reached out to children in Monserrat who had to end their education in Primary School and took them into her home so that they could attend the Seventh Day Adventist School in Antigua. She has an open loving heart and a strong concern for the advancement of others. She’s not just a mother but a close friend, her children’s confidant, a motivator, a teacher, an example of true Christian.