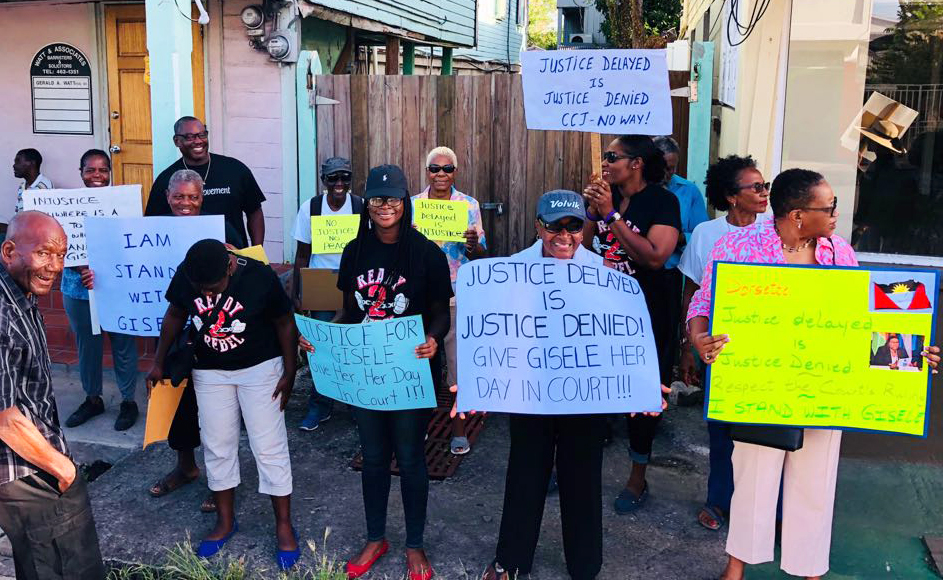 At 7 am today, members of the activist group, The Movement, gathered outside the law office of Watt and Dorsett on Newgate Street to stage a picket in support of former board of Education Secretary D. Gisele Isaac.

The Movement body decided last Friday, in their general meeting, to, “Stand with Gisele for justice,” according to the body’s president Algernon “Serpent” Watts.

“Justice delayed is justice denied,” said the president of the drawn-out court battle.

Approximately 30 members of the group showed up this morning in solidarity for Isaac, who is also a member of the group.

Various placards had the mantra, “Justice delayed is justice denied.”

Others read, “No justice, no peace”, “CCJ no way!”, “My Black life matters”, “Respect the court’s ruling”, “Our justice system is broken”, and “Advantage hotter than hell”.

Soon after the Antigua Barbuda Labour Party (ABLP) took office back in 2014, Isaac was locked out of her office at the Board of Education and subsequently constructively dismissed from her post as Board Secretary.

She has since filed a wrongful dismissal suit against the government.

The government, represented by the law office of Watt and Dorsett have since filed several motions against Isaac and her legal team on procedural matters which have, to date, all been struck down by the High Court, Appellate Court and lately the Privy Council just months ago.

“The Privy Council, three months ago,” explained Isaac, “Handed down its decision that I must be given a High Court date to bring my suit against Michael Browne and against Cutie Benjamin, both representing the Cabinet.”

“The decision also stated that the government is to pay my attorney fees.”

Isaac went on to explain that none of these orders of the court have been adhered to by the government or its representatives.