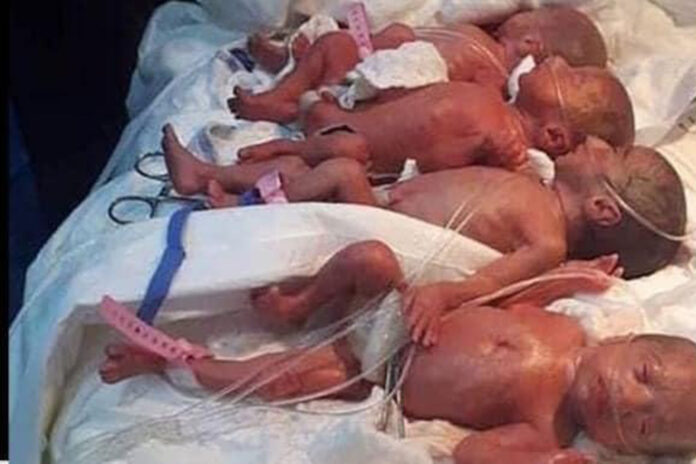 A 25-year-old mother who was expecting to give birth to an already jaw-dropping seven babies was shocked to find two more babies tucked in her womb during labor — making her one of the few women in history to birth nonuplets.

Halima Cisse, from Timbuktu, was told by doctors in Mali’s capital, Bamako, that she’d be having seven babies. A second opinion from doctors in Morocco confirmed the shocking news.

Cisse’s pregnancy had already made national headlines before she went into labor. So invested were Malians that the nation’s president, Bah N’Daw, ordered that Cisse be sent to North Africa in late March to be able to give birth with specialists present.

She was admitted to a Moroccan clinic on March 20 and remained on bedrest until giving birth on Tuesday.

And that she did — to a whopping five boys and four girls — via cesarean section, according to Mali’s health ministry.

“The mother and babies are doing well so far,” health minister Fanta Siby told Agence France-Presse, as reported in the Guardian. Siby said they confirmed the news with Cisse’s resident doctor, who had accompanied the mom-to-be to Morocco, and added that the family is currently resting there with plans to return to Mali after thorough observation.

The birth is already being hailed as a miracle as doctors have estimated that each fetus faced more than 50% odds of being stillborn, according to Mali 24, via Daily Mail.

Nonuplets are exceedingly rare, with only three incidents recorded since 1971, including Cisse’s pregnancy. If the little ones pull through, the Malian mom would break the current world record now held by so-called “Octomom” Nadya Suleman, whose birth of eight in 2009 was the first and largest newborn set in the world to survive past one week — all of whom are still here today. That benchmark was previously set by the Chukwu octuplets in 1998, of which seven survived.

It is unclear whether in-vitro fertilization (IVF) was involved in Cisse’s pregnancy, as it is more common to give birth to multiples with the treatment.

Minister Siby also gave her regards to health-care workers in Mali and Morocco, “whose professionalism is at the origin of the happy outcome of this pregnancy.”