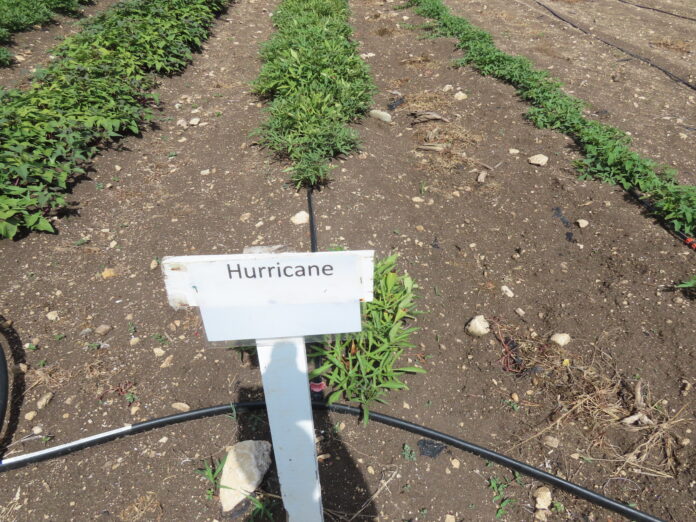 “This particular sweet potato that you see we are doing here is a part of a CDB Project that we are now implementing within the region. It’s funded by the Caribbean Development Bank and the countries are Antigua, Barbados and St Lucia.”

Those remarks were made by CARDI Technician,   Mr. Bradbury Browne as we recently the Caribbean Agricultural Research and Development Institute (CARDI) Headquarters where the project is being undertaken.

This project comprises a germ plasm collection of twelve (12) different varieties of sweet potato and Browne noted that they are in the process of maintaining the more popular varieties so that farmers can come and get planting material.

The CARDI technician said that part of this project is geared a lot towards value added products.

“The flour, the mash, the french fries , the chips;  so we are trying to develop the value added industry around this particular project,  rather than just planting the sweet potato just for the normal culinary things.”

The importance of the value added aspect of this production is two-fold- according to Browne.

It reduces dependency on flour for bread making activities, the french fries and the chips and it is also a healthier product in terms of the bread.

“So rather than you eating bread with a 100 percent wheat or white flour, this composite bread now has in 60 percent sweet potato, even the cassava too, so it’s a more healthier product and it reduces our dependency on wheat flour.”

In addition, Browne noted that they have a particular variety of sweet potato at CARDI which is the Beauregard.   This is mainly used for bread making activity.

“And that seems to be doing well, as a matter of fact, the Ministry of Agriculture had this programme where they were making the bread and every time they have it, it’s oversubscribed, so it’s something that the community wants, but it’s just that we need some farmers to grow it so that it can be processed and readily available for bread making.”

“They have some that are drought tolerant; they have some that they only grow well in the short day/ long night, cool night kind of environment; so it’s important to have an assortment of varieties that you can actually produce sweet potatoes all year round.”

And we also learned that sweet potato has some interesting names like the hurricane, mandela, king crown, purple queen, chicken foot and black rock, just to name a few.