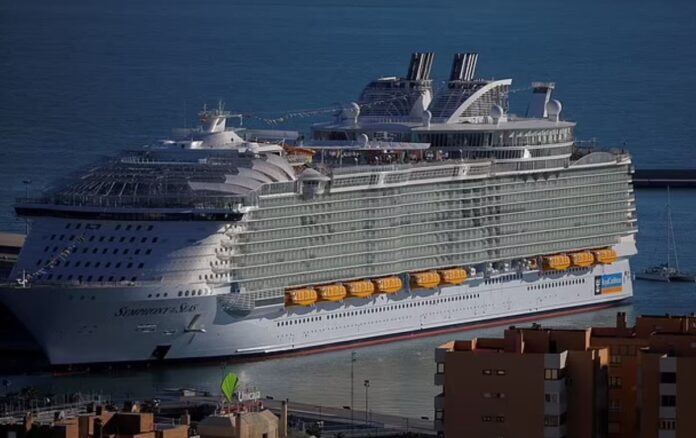 Forty-four passengers onboard Royal Caribbean’s Symphony of the Seas cruise tested positive for COVID-19 after the ship docked in Miami on Saturday.

The cruise line also announced that one of the passengers onboard a prior cruise itinerary had tested positive for the Omicron variant.

‘We were notified by the CDC that a guest onboard our (December) 4th cruise tested positive and it was identified as omicron,’ a spokesperson for Royal Caribbean told USA TODAY on Saturday. ‘They asked us to notify guests on the sailing, the one that ended today, and the current one.’

Forty-four out of 6,074, passengers – or about .72percent – onboard the cruise that departed on December 11 tested positive for COVID after the trip around the Eastern Caribbean. The cruise line said they’ve all been quarantined.

The scene is slightly reminiscent of the early stages of the outbreak in 2020, when cruise ships became the first super-spreaders due to their enclosed environment and contact between travelers from different cities and countries.

Passengers were warned by Royal Caribbean of the 44 cases. The cruise line added that the guest who had previously tested positive for Omicron had failed to report their symptoms to the crew while onboard.

‘This guest did not report symptoms to our onboard medical teams as outlined in our health protocols,’ Royal Caribbean said in an email, according to USA Today. ‘Their post-cruise test results were subsequently confirmed as the omicron variant.’

‘They were found as a result of immediately identifying close contacts after a guest tested positive,’ Royal Caribbean spokesperson Lyan Sierra-Caro said.

‘Everyone who tested positive is asymptomatic, and we continually monitored their health. Six guests were disembarked earlier in the cruise and transported home. The remaining guests received assistance today upon our arrival,’ she added.

She said that the Omicron case was unrelated to the 44 cases on Saturday.

Onboard Royal Caribbean cruise ships, passengers age 12 and older are required to be fully vaccinated and to test negative to board the cruise.

Those under 12 are required to have a negative test.