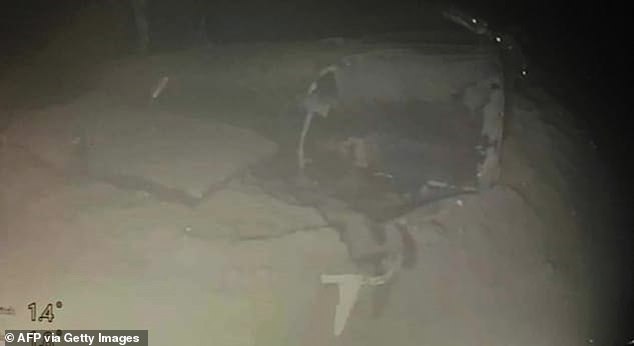 A submarine which vanished with 53 crew members on board in Indonesia has been found broken in three parts off the coast of Bali.

Indonesia’s military has also officially announced that all 53 crew members are dead.

The grim announcement comes a day after Indonesia said the submarine, which went missing last week, was considered sunk.

Officials had also said the KRI Nanggala 402’s oxygen supply would have run out early on Saturday, three days after the vessel went missing off the resort island of Bali.

‘It was broken into three pieces,’ said Navy Chief of Staff Yudo Margono.

More parts from the doomed submarine were also retrieved, including an anchor and fluorescent orange safety suits for emergencies, authorities said.

The discovery comes a day after the navy had first confirmed the retrieval of fragments from the submarine and declared that it had sunk, effectively ending any chance of finding survivors.

Among the earlier items recovered were a piece of the torpedo system and a bottle of grease used to lubricate periscopes.

They also found a prayer mat commonly used in Indonesia, the world’s most populous Muslim-majority nation.

Warships, planes and hundreds of military personnel had led a frantic search for the submarine since it disappeared this week during training exercises, hoping for a miracle rescue before its known oxygen reserves ran out.

But on Sunday, Indonesian military head Hadi Tjahjanto said there was no chance of finding any of the crew alive.

He said: ‘With deep sadness, I can say that all 53 personnel onboard have passed.

‘We received underwater pictures that are confirmed as the parts of the submarine, including its rear vertical rudder, anchors, outer pressure body, embossed dive rudder and other ship parts.

‘With this authentic evidence, we can declare that KRI Nanggala 402 has sunk and all the crew members are dead.’

The navy previously said it believes the submarine sank to a depth of 2,000-2,300ft, much deeper than its collapse depth of 655ft, at which point water pressure would be greater than the hull could withstand.

An underwater robot equipped with cameras and deployed by Singaporean vessel MV Swift Rescue provided the images, while the Indonesian vessel KRI Rigel had scanned the area where the submarine was believed to have sunk using multibeam sonar and a magnetometer, Tjahjanto said.

The cause of the disappearance was still uncertain.

The navy had previously said an electrical failure could have left the submarine unable to execute emergency procedures to resurface.

An American reconnaissance plane, a P-8 Poseidon, landed early on Saturday and had been set to join the search, along with 20 Indonesian ships, a sonar-equipped Australian warship and four Indonesian aircraft.

The German-built diesel-powered KRI Nanggala 402 had been in service in Indonesia since 1981 and was carrying 49 crew members and three gunners as well as its commander, the Indonesian Defence Ministry said.

Indonesia, the world’s largest archipelago nation with more than 17,000 islands, has faced growing challenges to its maritime claims in recent years, including numerous incidents involving Chinese vessels near the Natuna islands.

‘My wish now is that my son and all the crew can be found,’ Adi’s father Edy Sujianto said from his home on Java island.

‘My son had wanted to become a soldier since he was a child. That was his dream.’

‘All Indonesians convey their deep sadness over this incident, especially to the families of the submarine crew,’ he said.

Authorities have not given an explanation for the accident, but said that the submarine may have suffered a blackout that left its crew unable to resurface.

They discounted an explosion, however, saying Saturday that the evidence suggested the submarine came apart as it was crushed by massive water pressure in the vast depths.

‘Submarine hulls are pressurised… but when they’re breached then water would come flooding inside,’ said Wisnu Wardhana, a maritime expert at Indonesia’s Sepuluh Nopember Institute of Technology.

‘Can you imagine if water with that kind of pressure hits people?’

Retired French vice-admiral Jean-Louis Vichot earlier told AFP that a submarine’s hull could collapse ‘like a folding accordion’ if it hits depths way beyond its limits.

Any salvage operation would be risky and difficult, navy chief Margono said.

‘We’ll discuss it to make a decision on how to lift the submarine in this condition,’ he said Sunday.

‘I want to lift it, but how do we bring it up from (these depths)?’

Neighbouring Malaysia, as well as the United States, India and Australia, were among the nations helping in the hunt.

Search vessels, reconnaissance aircraft and submarine rescue ships had been deployed to scour a zone of about 10 square nautical miles (34 square kilometres).

The submarine – one of five in Indonesia’s fleet – disappeared early Wednesday while it was scheduled to do live torpedo training exercises off Bali.

The crew asked for permission to dive. It lost contact shortly after.

Later, search teams spotted an oil spill where the vessel was thought to have submerged, pointing to possible fuel-tank damage, and a catastrophic accident.

The submarine – delivered to Indonesia in 1981 – was seaworthy, the military said.

The model has been used by more than a dozen navies around the world.

But investigators would look at the Indonesian submarine’s age as a potential factor, analysts have said.