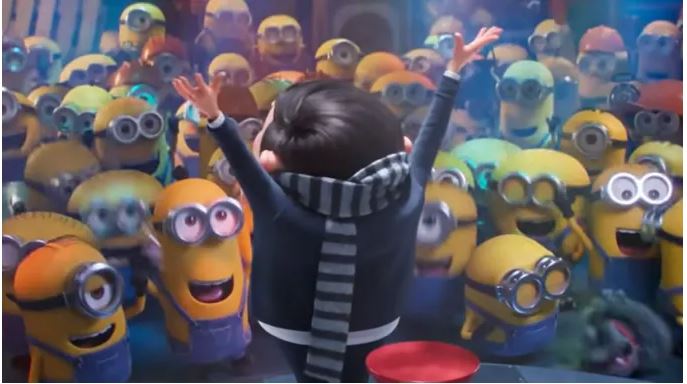 Minions: The Rise of Gru brought in an estimated $108.5 million in ticket sales from 4,391 screens in North America, Universal Pictures said Sunday. By the end of the Monday’s July Fourth holiday, it will likely have earned over $127.9 million. CLICK HERE TO JOIN OUR WHATSAPP GROUP FOR NEWS UPDATES.

The film is on track to become one of the biggest openings ever for a July Fourth holiday weekend, a record previously held by “Transformers: Dark of the Moon” which made $115.9 million in its first four days in 2011. Including international showings, where “Minions: The Rise of Gru” is playing in 61 markets, its worldwide gross is sitting at $202.2 million through Sunday.

This is just the latest in a string of successes for Universal’s family releases, including “Sing 2,” which has grossed over $406 million since opening in December, and “The Bad Guys,” which has made over $243 million. “Minions: The Rise of Gru” serves as further proof that family audiences are willing to go back to the movie theater.

“Minions 2” attracted all ages to the theater, even the very young. According to PostTrak surveys, 12% were under the age of 10.

The spinoff of the popular “Despicable Me” series was delayed two years because of the pandemic. The sequel to the 2015 film “Minions” was originally slated for a July 2020 release. While many other animated family films opted for streaming or hybrid releases, “Minions,” much like “Top Gun: Maverick,” stayed the course and waited for an ideal time to launch in theaters only. And as with “Top Gun” the wait, it seems, was worth it.