Labour Minister Steadroy “Cutie” Benjamin has promised minimum wage workers in the country an increase if the Antigua Barbuda Labour Party is returned to office.

Speaking in Thwaites Corner on Thursday night, Benjamin said all recent increases in the minimum wage have come under labour party governments.

“In 1999, I was the minister of labour then and we had an increase in the minimum wage. It took us until 2015, the first of January when this government once again increased the minimum wage to EC$ 8.50,” he boasted.

Benjamin spoke to the issue of the minimum wage while making references to his government’s busy parliamentary agenda in the last three and a half years.

He told party supporters that another increase is on the horizon for people at the bottom of the pay scale. 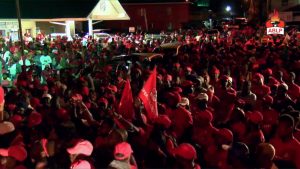 “And I make this promise tonight, that when we shall have been returned to power on the 21st, very soon thereafter, we will look at the minimum wage and increase that too,” Benjamin stated.

He said the issue of the cost of living must be looked at.

A recent poll by Peter Wickham put the cost of living as one of the major concerns for residents at this time.

27% of Antiguans, the largest percentage claimed that cost of living was their biggest worry while Unemployment and Crime shared the second spot at 15%.