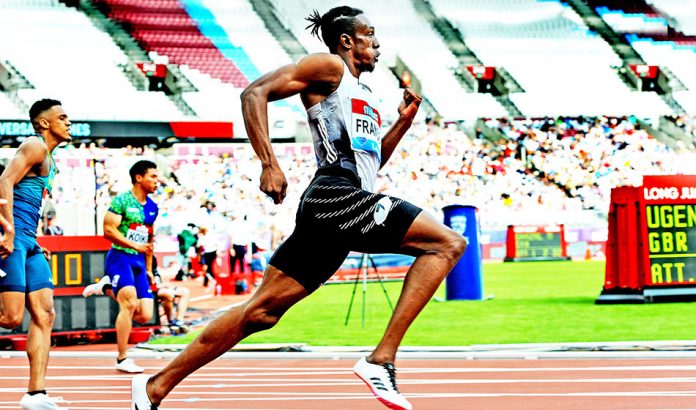 While much attention will understandably be on the likes of Zharnel Hughes and Adam Gemili at this weekend’s Müller British Athletics Championships, there is another athlete who is flying under the radar towards securing a sprint place in Doha.

Miguel Francis believes he made a statement with his 19.97 200m at last month’s Müller Anniversary Games as he continued his comeback after injury struggles and he’ll be looking to build on that in Birmingham on Sunday.

The Montserrat-born sprinter transferred his allegiance to Britain in 2017 and hopes to represent the nation at the IAAF World Championships in Qatar later this year in both the half-lap event and relay.

His UK-leading time clocked when finishing runner up behind Xie Zhenye of China’s 19.88 Asian record in London ranks him equal third on the British all-time list alongside Gemili, behind only John Regis and Nethaneel Mitchell-Blake, though he has a faster PB of 19.88 – just 0.01 off the British record – which he ran in 2016.

“After what I have been through, to come back and run 19 seconds, that should be a statement, definitely,” said Francis, who works with Glen Mills, coach of sprints great Usain Bolt, in Jamaica as part of the Racers Track Club.

“My training over the past six weeks, I’ve been feeling really good, really strong,” added the 24-year-old, speaking with AW last month after his sub-20 second run in London.

“I knew the type of shape I was in but I wasn’t 100 per cent confident in myself because I was coming off a few injuries. To run sub-20, I’m really pleased with that.”

Francis represented Antigua & Barbuda at the 2014 Commonwealth Games and 2015 world championships having moved there with his family when he was a few months old after a volcanic eruption on his home Caribbean island.

But the Wolverhampton & Bilston athlete, who has family in the West Midlands of England, was eligible for a transfer to GB with his birthplace being a British overseas territory and his focus is now on the British Championships and securing a place on the team bound for Doha.

“I’m feeling really good,” said Francis, who has had surgeries on his right ankle and knee in the past couple of years. “My confidence level was just not here because I’ve hardly been competing. This is my first race since May, my first 200m since April.

“I’ve been seeing everybody else running their fast times and to come out here and run fast, it’s a confidence boost and I’m just looking forward to the rest of the season.”