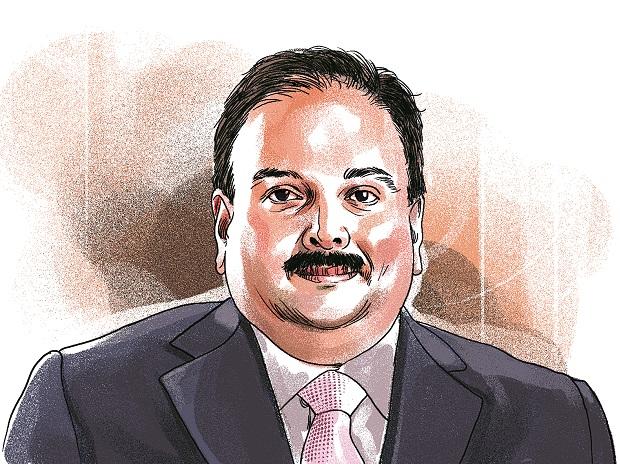 Business Standard: The case of fugitive diamantaire Mehul Choksi is proving to be a hot potato for the governments of Carribbean island countries, with Antigua and Barbuda asking the neighbouring Dominica to repatriate him to India, and the latter nation considering returning him to Antigua.

Sources in India said the government is making efforts to bring him back as soon as possible.

The fugitive businessman, who was residing in Antigua and Barbuda since 2018 after his escape from India, had gone missing on Sunday under mysterious circumstances. He was later “detained” in Dominica for illegal entry.

Choksi’s lawyers have raised questions over the claims of his escape from Antigua and Barbuda, calling it “abduction” by people who looked like Indian and Dominica policemen.

“Lawyers for Antigua and Barbuda and Dominica have been trying to have a legal interview with Mehul Choksi as per his constitutional rights in Dominica but they were denied any access to him,” Choksi’s lawyer Vijay Aggarwal said.

He said after a lot of effort, when lawyers met him he narrated horrifying details to them, saying that he was “forced” to get into a vessel from Jolly Harbor in Antigua and taken to Dominica.

Aggarwal said there were marks on his body which showed that something was fishy.

“I guess it was a strategy to take him to another country so that there are chances of sending him back to India. So I don’t know what forces are operating. Time will tell,” he said.

They have filed a habeas corpus petition in Dominica, he said.

After news of Choksi’s arrest in Dominica came on Tuesday night (local time), Browne told local media that he has given “clear instructions” to the Dominican authorities to repatriate Choksi to India.

“We asked them not to repatriate him to Antigua. He needs to return to India where he can face the criminal charges levelled against him,” Antigua News Room, a media outlet, quoted Browne’s interaction with journalists in Antigua and Barbuda.

Confirming Choksi’s presence on its soil, Dominican Ministry of National Security said that he has been “detained” for illegal entry into the country.

“The Ministry of National Security and Home Affairs is in communication with the authorities of Antigua and Barbuda to ascertain some facts, including the status of his Antiguan citizenship,” it said.

“Once the information is provided by the Antigua authorities, possible arrangements will be made for Mr. Mehul Choksi to be repatriated to Antigua,” the statement said.

Choksi, who had recently fled from Antigua and Barbuda, was captured after an Interpol Yellow Notice was issued against him.

A Yellow Notice is issued by the Interpol to track missing persons.

A more stringent Interpol Red Notice, which seeks arrest of the fugitive, was already issued against Choksi on the request of the CBI.

Meanwhile, in India, authorities got into contact with governments of Antigua and Barbuda and Dominica over Choksi.

“We are in touch with them. Our interest in getting fugitives like Choksi and others remains strong,” said a source, adding the focus has been to bring them back to the country at the earliest.

Probe agencies are pursuing the matter through External Affairs Ministry to bring back Choksi to India.

Antigua and Barbuda Prime Minister Gaston Browne said he has asked Dominica to hand the diamantaire over to India directly.

After news of Choksi’s arrest in Dominica came on Tuesday night (local time), Browne told media that he has given “clear instructions” to the Dominican authorities to repatriate Choksi to India.

“We asked them not to repatriate him to Antigua. He needs to return to India where he can face the criminal charges levelled against him,” Antigua News Room, a media outlet, quoted Browne’s interaction with journalists in Antigua and Barbuda.

Choksi is wanted in a Rs 13,500-crore loan fraud in the Punjab National Bank (PNB). Choksi and his nephew Nirav Modi allegedly siphoned off the public money from the state-run PNB using fraudulent letters of undertaking.

Nirav Modi, lodged in a London jail, is contesting his extradition to India after repeated denial of his bail by courts.

Choksi was last seen going for dinner in his car in Antigua and Barbuda on Sunday. His staff had reported him missing after his car was found. The businessman’s lawyer had confirmed that Choksi had been missing since Sunday.

The reports of Choksi gone missing created a flutter in the Caribbean island country after the opposition raised the issue in the Antigua and Barbuda Parliament.

Responding to the opposition, Prime Minister Browne had said his dispensation was “collaborating” with the Indian government, neighbouring countries and international police organisations to try and locate him.

Choksi had taken citizenship in Antigua and Barbuda in 2017 and fled India in the first week of January 2018. The PNB scam came to light subsequently.

Both, Nirav Modi and Choksi, are facing a CBI probe.