Antigua and Barbuda’s medical and healthcare services have received a major and timely boost with the recent opening of Woods Radiology, a facility that has increased the country’s capacity in providing radiology services for the detection and diagnosis of conditions in the human body.

Conveniently located at Woods Centre on Friar’s Hill Road, Woods Radiology offers a selection of new, world-class, high-tech digital equipment.  They include a Computerised Tomography Scan (CT – Scan) offering more detailed and sharper imagery of the body’s organs, bones and soft tissue; an X-Ray system with a digital reader and wireless system that allows sharp images to be transmitted to a control room and computer, almost instantly; and a digital Ultrasound system that provides clear images of the body’s internal organs and tissues.  The facility also now adds a much needed third mammogram machine to the country’s inventory with the device rendering crisper imagery of breast tissue for easier detection of abnormalities.

Every image that is captured, regardless of the specific equipment used, is not only stored within its specific computerised system but also wirelessly transmitted to and stored in a central database. This allows information on patients to be more easily accessed by the doctors and technicians, as well as provides a backup for each system. The facility is also fully protected from any radiation with the walls and doors of the CT- Scan and X-Ray rooms lined with lead, following the advice and guidelines of a Radiation Physicist.

For several years, Dr. Jason Belizaire, the proprietor of Woods Radiology, has offered limited radiology services providing Ultrasounds and X-Rays on a small scale, at his private practice.  Speaking as to why he made this major investment in expanding his offerings, he stated: “I wanted to take things to the next level and please my patients who for many years have been asking that I do this.” He further stated that his mission is to provide the highest quality of care to the country with superior and friendly service from the facility’s doctors, technicians and administrative staff.  Since its opening, the facility has received rave reviews on the quality of service being offered.

The increased capacity of the island’s radiology services, provided by Woods Radiology, is seen as a timely intervention as the Sir Lester Bird Medical Center has been strained by the COVID-19 pandemic, which intermittently has caused a backlog in radiology services at the country’s lone hospital.  Dr.  Belizaire noted: “Anything done privately helps to reduce the burden on the public system.”

The facility to date has a staff complement of five (5) including a Radiologist, a Radiographer, Ultra Sound Technician, Administrative Assistant and Office Manager. The environment is modern and attractive, with waiting areas that can seat up to sixteen people.

Dr.  Belizaire has pointed out that he could not have done this venture without the support of several persons, stating: “I would like to thank the Prime Minister, the Honourable Gaston Browne, the Attorney General, the Honourable Steadroy ‘Cutie’ Benjamin and the Cabinet of Antigua and Barbuda for granting me duty-free concessions to build and equip this facility, that benefits not only my patients but, the people of Antigua and Barbuda as a whole.” He further expressed his thanks to his beloved wife, Patricia Belizaire and his mom and dad (the latter now deceased) for their enduring support; his brother Steven Belizaire, a building contractor, who assisted in getting the premises ready; his shipper Terrence Dornellas who ensured that the equipment and supplies arrived on a timely basis; his IT specialist, Mr. Trent Davis for connecting all the dots, ensuring an efficient computer network system and all his staff for their dedication and unwavering support. 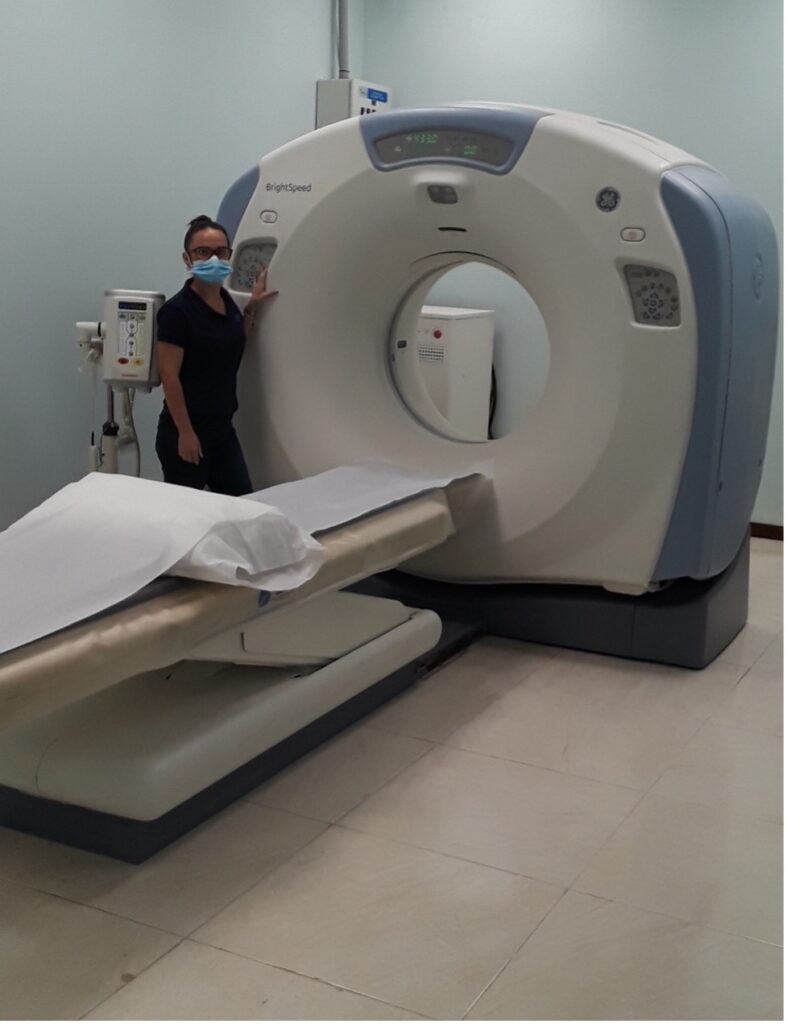 Looking to the future, Dr. Belizaire stated that he will be keeping close tabs on developments in radiology and that he will adapt accordingly to ensure that Woods Radiology is always on the cutting-edge of providing superior services using up-to-date technologies, operated by highly trained and experienced doctors and technicians.