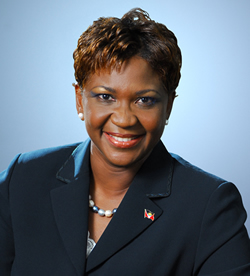 An opposition party is not at all pleased with the continued push by Prime Minister Gaston Browne to make Antigua and Barbuda an ‘entrepreneurial socialist’ economy.

Head of the National Democratic Alliance (DNA) Joanne Massiah said the private sector should be the driving force of a country’s economy.

Prime Minister Gaston Browne has been pushing his idea of entrepreneurial socialism for quite some time, and again yesterday in his Independence Day address.

Massiah said the DNA is “most uncomfortable” with the PM’s proposition for the entrepreneurial socialism model.

She said the government must have consultations with the relevant stakeholders, including the private sector and regional and local technicians to ensure that the economy becomes more robust.

According to Massiah, an incentives package or some sort of stimuli must be devised that would create “a greater injection of capital by these persons who are desirous of entering businesses in Antigua and Barbuda.”

She said the government, now more than ever, has to engage with local business operators where we will have persons from a broad range of industries being afforded a fair opportunity to compete with government’s understanding of the unique challenges facing small businesses.

“We are not saying there may not be certain sectors in which government’s involvement may be required, but when we listen to the prime minister, the prime minister seems to be suggesting that government must have a hand in every industry,” Massiah said on Observer Radio this morning.

The DNA head made mention of a matter in which the government decided to team up with a company out of Canada to operate buses and compete with existing stakeholders within the tourism sector without first consulting with the relevant stakeholders, including tour operators and bus drivers.

Massiah said the correct thing for the government to do was to see what challenges are being faced by those within the sector and attempt to assist them.

She added that the prime minister needs to take a step back, “sit down and soberly reflect and understand that [in] running a country consultation is key. Let us demonstrate that government understands the unique challenges facing businesses in the country.”

Massiah noted that when an economy is lagging the government is expected to create a stimulus as has happened in other countries.

PM Browne has said to detractors that the model would not limit businesses, but enhance the product and create more robust economic growth.